Some people have been led to believe that vaping is completely safe. However, there are significant risks to be aware of — especially for young people.

Nicotine is a stimulant that makes the nervous system prepare the body for physical and mental activity. It causes breathing to become more rapid and shallow, and increases the heart rate and blood pressure. Nicotine exposure from vaping varies quite a bit depending upon the contents of the e-liquid, the type of device used and how it is used.

Vaping exposes young people to nicotine at a time when the brain is most at risk for addiction. Because the brain continues to develop until early adulthood, roughly age 25-30, use of any addictive substance prior to these years is especially risky. Young people who vape are affected much more than adults by nicotine.

Exposure to toxic chemicals and other harmful ingredients

Vapes contain a number of chemicals, metals and ultrafine particles. These are poisonous when heated to form an aerosol and then inhaled. Because of their chemical ingredients, certain popular flavors — such as cinnamon, vanilla, butter and mint — are especially harmful. Some of the flavoring chemicals are considered safe when eating or drinking. However, once they are heated to produce an aerosol, they form additional harmful compounds that can cause lung damage. There also is evidence that some metals and other components of vapes can seep into the e-liquid and enter the lungs when heated and inhaled, causing mild to severe lung damage.

Nicotine is a highly addictive substance. People who vape can quickly become addicted to the nicotine that is in nearly all vapes. They are also at increased risk of starting to smoke cigarettes or use other addictive substances. If your child stops vaping, even for a short period, they can experience withdrawal symptoms. These include strong cravings, irritability, fatigue, headache, sleeplessness and difficulty concentrating. These symptoms can drive them right back to the nicotine product, even when they want to quit. In fact, many people who are able to stop smoking cigarettes by switching to vaping find it extremely difficult to quit vaping. This is due to the very high doses of nicotine and the ease of vaping. 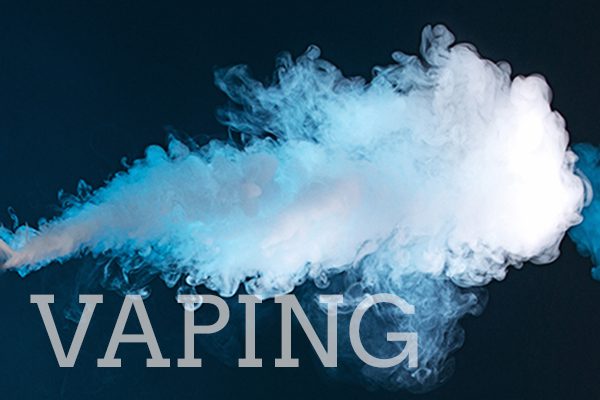 Teens and young adults who vape are significantly more likely than those who do not vape — about four times as likely — to  end up smoking traditional cigarettes.[1] This is true of people who never smoked cigarettes and had no intention of, likelihood of or interest in doing so. Strong and consistent research also shows that vaping is not a safe or reliable way to quit smoking. For many people, vaping can actually make it more difficult to quit smoking.

Young people who vape have five times the likelihood of those who do not vape of using tobacco products such as cigarettes, hookahs, cigars or pipes. The majority of people who vape to help them quit smoking end up becoming ‘dual users.’[2] This means they are smoking in places and situations where they can do so and vaping in places and situations where smoking is impossible. Dual users, therefore, actually take in more nicotine and other potentially toxic chemicals than people who only vape or only use other tobacco products.

Vaping devices, especially those with poor quality batteries that have been stored improperly or have been modified by the user, can malfunction or explode. This results in burns and other injuries. Also, if your child is exposed to e-liquids through the mouth, eye or skin contact, they can experience nicotine poisoning, resulting in vomiting, seizures, brain injury or death.

More and more, nicotine and other chemicals in vapes are being tied to an increasing heart rate and blood pressure and the risk of heart attack and stroke, as well as inflammation, asthma and wheezing. They also can cause inflammatory processes and depress immune function in lungs, and are associated with chronic bronchitis and a reduced ability to fight off bacterial and viral infections.