How To Talk With Your Kids About Vaping

Jump to:
What is Vaping?
Is Vaping Safe?
Marijuana & Vaping
What Can You Do to Prevent Vaping?
What to Say About Vaping?

It’s been around for over a decade, but vaping’s popularity exploded in 2017, taking many families, schools and healthcare providers by surprise. Vaping, or Juuling (named after a popular vape device called JUUL), is the inhalaing and exhaling of an aerosol produced using a vape device.

Nearly one in three high school seniors tried vaping in the past year.1 With advertising geared toward teens and young adults, devices designed to attract attention and thousands of flavors to choose from, the expectation is that growth will continue.

For every story touting the benefits of vaping, there is an equal number raising concerns about its risks. The information here and in the accompanying vaping guide is meant to help you understand vaping, its appeal to youth and what research has to say about the known and unknown risks.

Vape devices, known as e-cigs, e-hookahs, mods, vape pens, vapes, tank systems and Juuls, contain four basic components: a cartridge or tank to hold e-liquid (or e-juice/vape sauce), a heating element known as an atomizer, a battery and a mouthpiece to inhale. A sensor detects when a person is trying to inhale. This triggers the battery to supply electricity to the atomizer. The heat given off vaporizes the e-liquid. The resulting vapor is what is inhaled. 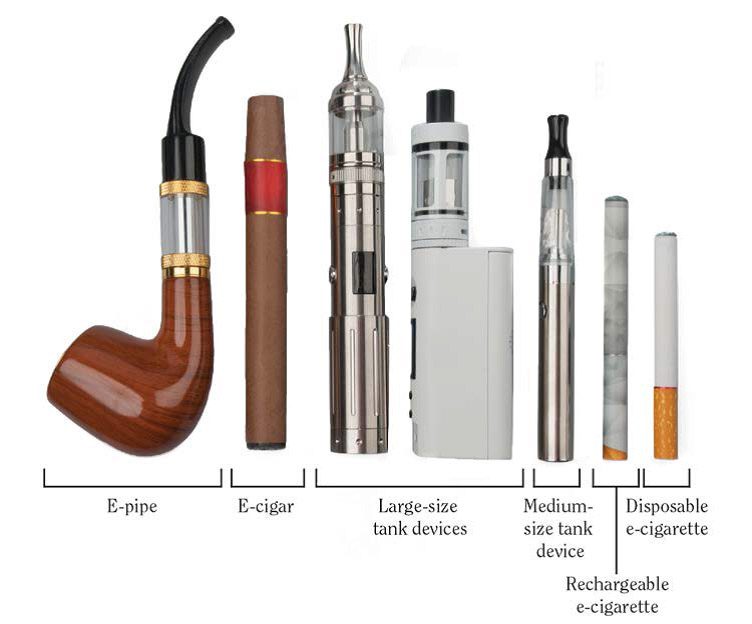 Some vape devices mimic cigarettes, cigars or pipes while others resemble USB sticks and other everyday objects like a guitar pick. Larger devices like tank systems, or “mods,” look more like a small cell phone. Some devices are disposable while others can be recharged and refilled.

What is being vaped?

Many substances can be vaped, but the most common are variations of flavored e-liquids which come in small bottles or pre-filled pods or cartridges.

Vaping was intended to be a less harmful option for adult smokers, but enticing flavors combined with the power of social media to set off trends like “cloud competitions” (think smoke rings and other exhaling tricks) have made it attractive to many teens and young adults.

For more facts on vaping, download our complete guide >>

The short answer is no, vaping is not considered safe for teens and young adults, especially since their brains are still in a period of active development.

Vaping is a relatively new phenomenon so long-term studies of its impact on young adult health and behavior have yet to be conducted. The most comprehensive research to date is a report commissioned by Congress from the National Academies of Sciences, Engineering and Medicine. Released in January 2018, the report looked at exposure to nicotine and other toxic substances, dependence, harm reduction, smoking risks, cancer and more. Below are some key findings:

Devices and accessories designed for vaping marijuana are a booming business. Any marijuana use, whether vaped or otherwise, is a concern for adolescents and young adults. According to the CDC, marijuana use may have long-lasting permanent effects on developing adolescent brains. Negative effects include:

What Can Parents Do to Prevent Vaping?

Be equipped with facts. Download the vaping guide for parents and read it over. Remain familiar with vape devices, what’s being vaped and the risks associates.

Have conversations. Opportunities to discuss vaping can present themselves in many ways: letters from the school, advertisements, seeing it on TV, walking by someone vaping or passing a vape shop. Be ready to listen rather than lecture. Try using an open-ended question like “What do you think about vaping?” to get the conversation going.

Convey your expectations. Express your understanding of the risks along with why you don’t want your child vaping. If you choose to set consequences, be sure to follow through while reinforcing healthier choices.

Be a good role model. Set a positive example by being vape and tobacco-free. If you do vape, keep your equipment and supplies secured.

What to Say When Your Teen Asks

Q: Isn’t vaping safer than smoking cigarettes?
Exposure to toxic substances may be reduced, but there are still significant concerns when replacing smoking cigarettes with vaping. One’s lungs are exposed to fine particles, metals, other toxins and nicotine which are all harmful. You may use the example that “Driving 90 miles an hour with a seat belt on is safer than without one, but neither is safe.” The same goes for vaping. And as with all substance use, ask your child why they’re interested in vaping in the first place.

Q: Everyone is doing it, why do you care?
You can say, “I know you might think this because of what you see in school or on social media, but the fact is that the majority of teens are choosing not to vape. It might be popular among some kids, but that doesn’t mean it’s safe.”

Q: You smoke, so why shouldn’t I?
If you’ve tried to quit, respond by saying something like, “You’re right, smoking is unhealthy and I’ve tried to quit and wish I had never started. I don’t want you to start an unhealthy habit and struggle the way I have.”

Get information and guidance on how to prevent and address vaping with your kids. Download it, print it and keep it handy.

The above guide is available in Spanish as well. Download Guía de Vapear now, and explore all of our Recursos en Español.

The Unique Risks of Teen Substance Use

We do everything we can to keep our kids safe. When it comes to teen drug use, why do so many parents shrug it off as "a rite of passage?"

How to Talk About Marijuana

There isn’t one script for talking about marijuana, but here's what you’re likely to hear -- and a few suggestions for how to respond.

How to Address Underage Drinking

Alcohol is the most used substance among teens and young adults, posing substantial health and safety risks. Learn what to say about it.

Is your child using drugs? Use these tips to prepare for the conversation ahead, and lay the foundation for more positive outcomes.
Get Help
One-on-One Support
Parent Coaching
Spot Early Use
Intervene
Find Treatment
Support Recovery