What Parents Should Know About Kids Using CBD

THC (Tetrahydrocannabinol) is the most well-known component of marijuana, and it is the one that “gets you high,” so to speak. But have you heard of CBD? Many parents haven’t, or even if they have, they aren’t sure what to make of it or even understand if their son or daughter is using CBD. What’s certain is that it’s becoming more and more widely available, and like vaping, is often marketed to young people. Below is an overview of CBD, the numerous forms it’s sold in, its efficacy in treating various problems and current knowledge about its relative safety.

CBD, short for Cannabidiol, is the largest non-psychoactive component of marijuana, and interest in its effects is growing. High levels of CBD and low levels of THC are found in most medical marijuana products, but the CBD industry has started to expand and market their products as “life promoting” to healthy individuals.

There are hundreds of online companies selling CBD, with the market estimated to grow to $2.1 billion by 2020. CBD tinctures, edibles, sprays, vaping liquid, capsules and items such as gels, hand lotions and shampoos are widely available, varying in price and CBD content.

Some of these products are illegal, while others can be purchased in supermarkets and health stores by anyone. The legality of CBD varies by state, often based upon whether it is hemp-derived or marijuana-derived. Hemp and marijuana both originate from the cannabis plant, but cannabis crops grown for their flowers have high THC levels, while when grown for their fibers and stalks are usually called hemp. Regardless of how CBD is derived, it’s best to check your state laws with respect to legality as it’s a rapidly changing landscape.

Why is CBD so Interesting to Young People?

The U.S. in general is becoming increasingly interested in CBD because of its ability to produce the medicinal benefits of cannabis without the high. It’s seen as a potential medicine without the side effects typically associated with marijuana — especially for cancer, serious chronic pain and epilepsy. For the first time, the FDA approved a new drug based upon CBD derived from marijuana called Epidiolex in June 2018. It provides patients with a concentrated dose of CBD to treat seizures in rare forms of epilepsy.

Teens and young adults are using CBD as a homeopathic remedy for pain relief, depression and anxiety symptoms, acne, insomnia and boosting productivity. However, there’s a crucial difference between CBD that’s studied in labs for medical conditions like epilepsy and CBD products that are sold to consumers for well-being.

The biggest problem with CBD is that there is a lack of well-controlled trials and little understanding of the long-term effects. Further, the trials are focused on the action and benefits of the purified CBD compound, not an extract of CBD, which is typically found in commercial products. CBD products are for the most part unregulated, so users have to rely on the quality assurances of the companies that manufacture and sell them. 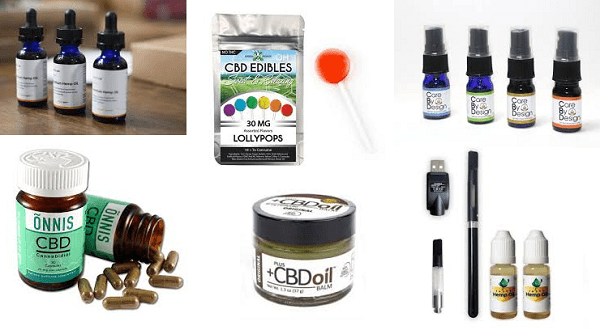 An assortment of different forms that CBD products can take

CBD does not appear to be dangerous in and of itself for short-term use, but many CBD products contain dangerous chemicals or synthetic CBD oil. For example, there were 52 cases of serious adverse effects including seizures, loss of consciousness, vomiting, nausea and altered mental status, in Utah from 2017 to 2018 after people ingested a CBD product. Surprisingly, no CBD was found in blood samples, only 4-cyano CUMYL-BUTINACA (4-CCB), or fake CBD oil. There aren’t any known brands that include harmful ingredients, but many producers do not test their products in labs nor share how they are produced. It’s difficult to know what you are getting.

For the most part, side effects from CBD alone are minor (dry mouth, dizziness, nausea), but they can be serious if the CBD products interact with other medications. CBD and other plant cannabinoids can interact with many pharmaceuticals by hindering the activity of cytochrome P450, a group of liver enzymes, so other drugs don’t metabolize as expected. Steroids, antihistamines, calcium channel blockers, immune modulators, benzodiazepines, antibiotics, anesthetics, antipsychotics, antidepressants, anti-epileptics and beta blockers could all potentially cause an adverse reaction when taken with CBD.

How Would I Know if My Kid is Using CBD? What Should I Look For?

It may be hard to know if your child is consuming CBD because of the minimal side effects and absence of a psychoactive effect. If you learn that your child is using CBD without a doctor’s or your permission, you should question it, and may even want to discuss the health impacts of it with your child’s doctor.

The World Health Organization declared CBD non-addictive, writing, “In humans, CBD exhibits no effects indicative of any abuse or dependence potential.” They do not, however, recommend consumption. While CBD does not appear to be harmful by itself, CBD producers are largely unregulated, so it’s difficult to know what is in products and the level of CBD concentration. Further, it may be worth questioning product claims in terms of capabilities as there are few studies demonstrating effectiveness for the host of problems CBD allegedly addresses. If it isn’t hemp-derived, it may be illegal in your state.

The bottom line is that if you’re a concerned parent, the best thing to do is to talk with your child about CBD just like any other substance. Start a conversation about why they’re interested in it, how it makes them feel and why they feel the need to use it. Come from a place of understanding and patience, and work to help your son or daughter make healthy decisions.

Connect to Talk About Your Child's CBD Use

Our Helpline Specialists are ready to help you discuss your child’s CBD use and help you make an action plan. All methods of contact are free and confidential.

Welcoming An Adult Child Back Home Because of COVID-19

Is you adult-aged child back home unexpectedly? We recommend a conversation about shared expectations and how you will live together.

In a Time of Disruption, Protecting Your Child from the Risks of Substance Use

What can parents and other caregivers do to reduce the potential that children – who are feeling frustrated, isolated and bored – might engage in substance use?

How Can I Prevent My Child from Overdosing?

You should encourage your son or daughter to seek treatment for their drug use. But there are things to do to help prevent an overdose in the meantime.