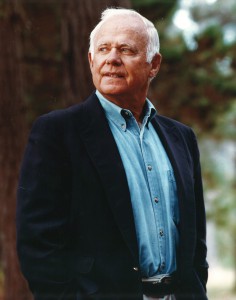 October 1, 2012 – New York, NY – the Partnership for Drug-Free Kids honors and remembers James E. Burke, who passed away on Friday, September 28. Burke, one of the nation’s most admired chief executives with a distinguished career at Johnson & Johnson (J&J), was Chairman Emeritus of the Partnership for Drug-Free Kids. He served as chairman for 13 years, and is remembered as an inspiring leader and champion for families and children in need.

As he approached retirement in 1989, Burke was deeply concerned about an epidemic of illicit drug use that was spreading across the country. He was urged to become Chairman of The Partnership for a Drug-Free America (now the Partnership for Drug-Free Kids), then a fledgling nonprofit organization attempting to use consumer research, advertising and marketing communications to “unsell” drugs to Americans. Burke, known for his extraordinary marketing skills, believed that the concept could work, particularly among the nation’s youth, who were continually tempted to try drugs for the first time.

“In leading Johnson & Johnson for 13 years, Jim Burke will be remembered as one of the greatest chief executive officers in American business history; but perhaps more importantly, he will be remembered as the individual who got out in front and led the nation’s efforts to fight the scourge of drug abuse afflicting the lives of millions of people when he took The Partnership to national scale,” said Roy Bostock, Chairman Emeritus of The Partnership. “Jim was a man of impeccable integrity and honesty who used his enormous leadership talents to make the lives of others healthier and happier. He was a one-of-a-kind human being.”

Under Burke’s leadership, The Partnership would grow to become one of the most effective and admired nonprofit organizations working in public health and substance abuse, educating parents and families on how to prevent and get help for teenage drug and alcohol use. Burke rallied thousands of business, media and communications professionals to support the cause, creating and airing messages that challenged the American public to change both their attitudes about and behavior toward drug use.

“Jim Burke changed my life and the lives of millions of people around the world. He believed in service, trust, and integrity and living life with only the highest standards. But mostly he believed in helping families and children,” said Tom Hedrick, founding member of the Partnership for Drug-Free Kids. “He saw that drug and alcohol abuse and addiction tore apart the very fabric of families, taking away health, hope, trust and even love. Long before it was revealed by science, Jim knew that addiction was a disease that was preventable and treatable. He spent the latter third of his life leveraging whatever resources he could muster toward that reality, with an uncommon mix of love and steely determination.”

In 2000, President Bill Clinton bestowed the Presidential Medal of Freedom on Jim Burke, the nation’s highest civilian award, citing his unique contributions during his career in both the private and public sectors. Fortune magazine also named Burke one of the 10 greatest CEOs of all time. As one of the most respected corporate leaders in the U.S. and as Chairman of The Partnership, his career came to define modern-day corporate social responsibility, as well as civic responsibility.

“Jim instilled in each of us that a passionate and disciplined commitment to our mission would make a difference in people’s lives. He demanded accountability in himself and in every person and function of the organization, and always helped us understand the final measure of our work must be proven effectiveness in making a positive impact in children’s lives,” said Steve Pasierb, President and CEO of the Partnership for Drug-Free Kids. “Jim is well known as a business legend, but he was also a wonderful person with whom to work, a great mentor for all of us to learn from and a truly good soul to admire as a role model in life. The 12 years I worked with Jim are the greatest in my career because he was the greatest in my career. And, always will be.”

Among the landmark achievements in the organization’s history under Burke was the focus on reaching more people, more often, with researched-based messages about the dangers and addictiveness of illicit drugs, particularly cocaine. Burke pledged to garner $1 million a day in donated time and space to help the U.S. understand that it needed to reduce its appetite for drugs and alcohol, and in little over a year, that goal was achieved, resulting in the largest sustained public service media campaign in U.S. history.

Bostock continued, “In the summer of 2002, Jim invited me to The Partnership’s office for a sandwich and a chance to catch up. Before I even sat down, Jim asked me to follow him as the next Chairman of the organization. Jim didn’t so much ask, as he did tell me that I had no choice. Classic Jim Burke, a man of focus and determination. It was one of the turning point moments in my professional life and a challenge I knew I must take. It was and remains to this day a great honor to have worked with Jim. My seven years as Chairman and the past three as a Partnership board member are owed to a man I deeply admire and had the privilege of calling a friend.”

“It continues to be my honor to chair a nonprofit that owes so much of its positive impact on society to Jim Burke. His vision and leadership transformed The Partnership into an effective, nimble nonprofit dedicated to addressing the growing issues of drug use by young people in our country. Today the staff and I are greatly saddened to lose a man who is both an inspiration and role model for each of us,” said Pat Russo, Chairman of the Partnership for Drug-Free Kids. Jim represented the absolute best of the corporate community and instead of what would have been a well-deserved retirement, dedicated himself completely to the work of helping children live healthy, drug-free lives so they could fulfill their full potential.”

As a member of the board of The Robert Wood Johnson Foundation, one of the largest philanthropic health organizations, Burke was instrumental in making substance abuse reduction a primary objective of the Foundation. As a result, hundreds of millions of dollars in grants reached key leaders across academia and health research, as well as cutting-edge programs in drug and alcohol prevention, early intervention, treatment and extended recovery support. This was critical to new understandings of addiction as a disease, its causes and its prevention and treatment.

From the time Burke became actively involved with The Partnership and until present day, one-third fewer Americans are using illegal drugs, and far fewer are becoming addicted.

“This extraordinary public health success was made possible by the work of millions of dedicated people, but it likely would not have been possible without the vision and commitment of Jim Burke. He was the loudest, most persistent voice for the under-recognized importance of substance abuse and the critical importance of investment in, and coverage of, progress in reducing its impact on America,” adds Hedrick.

Pasierb concludes, “Each morning when I walk into our office, the very first thing I pass is the James E. Burke conference room, which was created and filled with Jim’s photos and mementos to be a constant reminder to each person who works at The Partnership of the high standards and accountability that Jim demanded. Jim is part of the best DNA of our organization, a quality that we will never let go.”