Survey: Exposure to Anti-Drug Messages Among Teens Drops Dramatically by Two-Thirds as Drug Use Goes Up 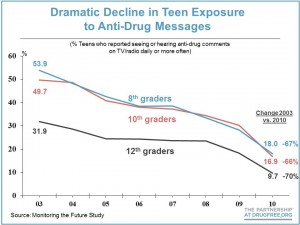 New York, NY – January 12, 2011 –The University of Michigan’s Monitoring the Future study (MTF) – the largest survey on teen drug abuse tracking over 46,000 8th, 10th and 12th graders – found a huge falloff in teens’ recalled exposure to drug abuse prevention messages over the past seven years. The new data from the MTF study have been released at a time when teens themselves report finding the drug-prevention messages to be effective.

Comparing 2003, the year in which kids and teens’ recalled exposure to drug prevention messages from the White House Office of National Drug Control Policy (ONDCP) ‘s National Youth Anti-Drug Media Campaign (NYADMC) peaked, to today, the proportion of 8th graders that reported daily/or more often exposure dropped from 54 percent to 18 percent, a dramatic decrease of two-thirds among the youngest group surveyed. Similar declines occurred among 10th graders (50 percent in 2003 to 17 percent in 2010) and 12th graders (32 percent to 10 percent). According to Lloyd Johnston, the principal investigator of the study, the rates of teens’ recalled exposure of drug abuse prevention messages are lower in 2010 than they have been since his research team began tracking all three grades nearly two decades ago.

“At a time when teen drug use is at relatively low levels, historically, and children are not learning as much through the news media about the health consequences of using many dangerous drugs, it is important that we get that information to them by other means – through prevention ads, in schools and through their families,” said Johnston. “If they don’t get those messages, teens will come to view drug use as less dangerous than their predecessors did and that misconception will leave them vulnerable to having their own epidemics of drug abuse. In fact, we are already seeing these signs beginning to happen now for teen use of drugs like marijuana, Ecstasy and LSD.”

Support for prevention programs like the state grants portion of the Safe and Drug-Free Schools and Communities Program, which was zeroed out in the 2011 budget, and the federal NYADMC, has dwindled significantly over the past decade. In fiscal year 2003, which marked the peak year for recalled exposure of drug abuse prevention messages among teens, federal support of the NYADMC was $145 million, compared to only $45 million for fiscal year 2010. The kinds of extracurricular activities – programs in sports, civics and the arts – that states and localities have funded to engage kids’ positive energies and help prevent substance abuse continue to collapse under relentless budgetary pressure.

“Our prevention infrastructure is disappearing before our eyes and the result of all this is not fair, but it’s undeniable: the additional burden is increasingly falling on the shoulders of parents and caregivers,” said Steve Pasierb, President of the Partnership for Drug-Free Kids. “The slashing of funds and lack of support, coupled with the discussion of further cuts for effective prevention programs, are going to have a direct impact on the 35 million American families with children at risk of abusing drugs or alcohol.”

Similarly, the percentage of teens who agreed that drug-prevention messages made them less likely to use drugs in the future also remained stable, although they reported they are exposed to fewer messages.

“There is evidence of a correlation between decreased drug use among teens and their exposure to drug abuse prevention messages,” said Pasierb. The alarming drops in the number of messages teens are seeing or hearing today is especially disturbing because the kids themselves report these messages are effective in keeping them from using drugs.”

Increases in Teen Use of Illicit Drugs Correlate with Decreased Support for Anti-Drug Messages
The MTF survey also measures teen attitudes about drug and alcohol use, including perceived harmfulness and disapproval, factors that can predict future substance abuse. The perception among teens that regular marijuana use is harmful decreased among 10th and 12th graders, but declined the most among the youngest group of 8th graders. The study also confirmed a new uptick in teen Ecstasy use, especially, among 8th and 10th graders, following drastic declines of this drug of abuse over the past decade. As teen anti-drug attitudes erode and move in the wrong direction, increases in drug use are sure to follow.

“While we recognize the current constraints on the federal budget, we urge Congress to fund ONDCP’s National Youth Media Campaign at the highest possible level and restore the funding cuts that have eroded the impact of this program and have most likely contributed to increases in teen drug abuse,” said Pasierb. “We would welcome the opportunity to work with Congress and the Administration to increase the frequency with which teens receive anti-drug messages, while demanding full accountability for the program and its outcomes.”

The National Youth Anti-Drug Media Campaign, administered by ONDCP, is aimed at reducing drug use among American teens. the Partnership for Drug-Free Kids assists in facilitating the creative development of the drug abuse prevention messages used by the NYADMC.

To learn more about how to help parents prevent, intervene in and find treatment for drug and alcohol use by their children, please visit drugfree.org

About the Partnership for Drug-Free Kids
The Partnership at Drugfree.org is a nonprofit organization that helps parents prevent, intervene in and find treatment for drug and alcohol use by their children.  Bringing together renowned scientists, parent experts and communications professionals, this public health nonprofit translates current research on teen behavior, parenting, addiction and treatment into easy to understand resources at drugfree.org.  The organization also reaches families through its community education programs which focus on local drug and alcohol issues of concern for parents, youth and the Hispanic community. the Partnership for Drug-Free Kids depends on donations from individuals, corporations, foundations and the public sector and is thankful to SAG/AFTRA and the advertising and media industries for their ongoing generosity.