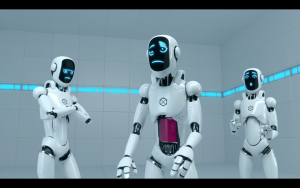 The Partnership’s award-winning mobile application DXM Labworks won two honors this month during the North American Effie Awards Gala in New York City. The campaign is a collaborative effort between the Partnership and the Consumer Healthcare Products Association (CHPA), and was created by Tribal Worldwide.

The Partnership, along with CHPA and Tribal Worldwide, accepted Bronze honors in two categories: “Disease Awareness & Education: Advocacy” and “Small Budgets, Services,” and was awarded alongside well-respected brands and campaigns like Apple, Dove and Truth.

The DXM Labworks app reaches teens directly to increase their social disapproval and perception of risk via several creative programs that aim to help reduce DXM and cough medicine abuse among teens. Dextromethorphan, or DXM, is the active ingredient in most cough syrups. The mobile app is designed to engage teens by allowing them to test-drive DXM abuse on a robot, rather than on themselves. So far, the app boasts more than 200,000 downloads and teens have spent an average of 6-7 minutes interacting with the app online.

Known globally as the preeminent award in marketing and advertising, the Effie Award is considered the most impressive, as it is awarded not just for creative excellence, but for effectiveness – signifying the work was one of the most effective marketing efforts that year.

Effie entries go through two rigorous rounds of judging and only a small percentage emerge as winners. As the competition continues to grow, winning an Effie has become increasingly more difficult and prestigious.