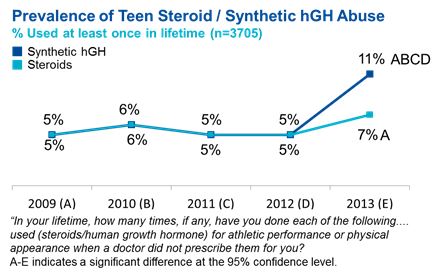 New, nationally projectable survey results released today by the Partnership for Drug-Free Kids confirmed a significant increase – a doubling – in the reported lifetime use of synthetic human growth hormone (hGH) among teens. According to the latest Partnership Attitude Tracking Study (PATS), sponsored by MetLife Foundation,11 percent of teens in grades 9-12 reported “ever having used” synthetic human growth hormone without a prescription, up dramatically from just 5 percent in 2012.

What is Synthetic Human Growth Hormone?

Human growth hormone occurs naturally in the body. Its primary function is to stimulate growth and cell production in children/adolescents, while helping regulate body composition, muscle and bone growth. Synthetic human growth hormone has been available since 1985. Congress specifically gave the U.S. Secretary of Health and Human Services the authority to approve medical uses of hGH and prohibited any off-label uses. The limited number of approved medical uses include: muscle-wasting disease associated with HIV/AIDS, adult deficiency due to rare pituitary tumors or their treatment, adult short bowel syndrome and long-term treatment of short stature in children and adolescents. Its illicit use (without a doctor’s prescription for an approved use) has been intended generally to mimic the muscle-building effects of anabolic steroids, with presumed benefits for both athletic performance and appearance. 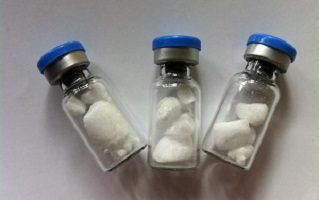 In addition to the reported increase in teen use of synthetic hGH, PATS confirms a gradual, long-term increase in teens’ reported lifetime use of steroids. Steroid use among teens has increased from 5 percent in 2009 to 7 percent in 2013. The PATS data show a strong correlation between the use of synthetic hGH and steroids. Currently, one in five teens (21 percent) reports that at least one friend uses steroids, and another one in five teens (21 percent) believes it is easy to obtain steroids. Both of these measures improved in 2010 and have since remained consistent.

“These new data point to a troubling development among today’s teens. Young people are seeking out and using performance-enhancing substances like synthetic hGH – and supplements purporting to contain hGH – hoping to improve athletic performance or body appearance without really knowing what substances they are putting into their bodies,” said Steve Pasierb, President and CEO of the Partnership for Drug-Free Kids.

Implications of Teens Using Synthetic hGH Without a Doctor’s Prescription

Teens are taking dangerous risks with their health by using performance enhancing substances – both boys and girls are entering a largely unregulated marketplace in which products of many varieties are aggressively promoted with promises of improved muscle mass, performance and appearance.

“These are not products that assure safety and efficacy. Prescription and over-the-counter medicines must go through rigorous testing to be proven safe before being sold to the public, but supplement products appear on store shelves without regulation from the Food and Drug Administration and must actually be proven unsafe before being removed from sale,” said Pasierb. “That creates a false perception of safety driving impressionable teens to risk their health with potentially dangerous products that are untested. And while it’s doubtful that all of the teens who reported having used synthetic hGH actually obtained prescribed synthetic human growth hormone, the proliferation of commercially available products that are marketed saying they contain synthetic hGH, or promote the natural production of hGH within the body, is staggering.”

The new study data also found a marked increase in the percentage of teens who reported awareness of online marketing of steroids and synthetic hGH, up significantly from 17 percent in 2012 to 22 percent in 2013. Teens are also less likely to believe there is great or moderate risk in using performance-enhancing drugs compared to prior years, and those who do not perceive synthetic hGH or steroid use as a risky behavior are more likely to use these performance-enhancing substances.

The PATS data confirm a significant year-to-year decline in the perceived risk (“great” or “moderate” risk) teens associate with using synthetic hGH without a doctor’s prescription (down from 86 percent in 2012 to 81 percent in 2013). The decline for perceived risk in steroid use is not as steep, but still statistically significant when compared to the past five years. In 2009, 85 percent of teens said there was great or moderate risk in using steroids, and 82 percent of teens currently share the same belief.

“We know that the win-at-all costs culture in sport and in society as a whole has a direct impact on the health and well-being of young people,” said Travis T. Tygart, CEO of the U.S. Anti-Doping Agency. “The results of this study further demonstrate the importance of educating young people, their parents and coaches on the risks associated with the use of performance-enhancing drugs, and the need to protect young people from those who would prey on them as easy marketing targets.”

Pasierb added, “Given the current regulatory framework of the supplement industry, and the amount of products being marketed and sold online, it is difficult if not impossible to know what exactly is contained in these products teens are consuming. So the implication for parents, healthcare professionals, policy makers and regulators is that this is an area of apparently growing interest, involvement and potential danger to teens that calls for serious evaluation of the areas in which current controls on manufacturing and marketing are failing to prevent the use of these products by teens.”

Disconnect in Parent Communication with Their Kids About Synthetic hGH, Steroids

The new PATS data highlights a disconnect between parents and teens, as only 12 percent of teens indicate that the last conversation they had with their parents about the risks of drug use included talking about synthetic hGH. This measure has remained stable over the past five years.

“What I encounter when talking to teens is the significant pressure they feel to excel,” said former professional cyclist and anti-doping advocate, Tyler Hamilton, who gave back his Olympic Gold medal after admitting to performance-enhancing drug use throughout his career. “Whether it’s in sports, school, social status or appearance, teens feel they need to be better. The study provides a good opportunity for parents and other influential figures in their lives to realize what teens are facing and reinforce a message of unconditional love and acceptance.”

Other Trends in Teen Use: Marijuana, Prescription and OTC Medicine and Alcohol

More than four in ten teens (41 percent) who have used marijuana started doing so before the age of 15. This is worrisome considering that those who initiate marijuana use at a younger age are more likely to use marijuana – as well as other substances – more frequently than those who begin using at an older age.

Hispanic and African American teens are also more likely to report using marijuana than their Caucasian counterparts (with 52 percent, 54 percent, and 39 percent indicating use, respectively).

Misuse and abuse of prescription medicine continues to be the third most prevalent drug abuse behavior measured among teens, following use of marijuana and alcohol. Almost one in four teens (23 percent) reports abusing or misusing a prescription drug at least once in their lifetime, and one in six (16 percent) reports doing so within the past year. In addition, Hispanic and African-American teens are more likely to report misusing or abusing prescription drugs compared to their Caucasian counterparts (with 27 percent, 29 percent, and 20 percent indicating use, respectively).

One notable exception was over-the-counter cough medicine. Teens reported an increase in lifetime (“ever tried”) use of OTC cough medicine to get high – from 12 percent in 2012 to 15 percent in 2013.  Past year and past month usage was unchanged since 2012.

The Partnership for Drug-Free Kids, in conjunction with Major League Baseball Charities (MLB), created the Play Healthy program which is designed to give parents and coaches a better understanding of the risks of using performance-enhancing substances, and equip them to help young athletes make healthier and safer decisions.

The Play Healthy program features a new website, which educates families on the risks of steroids and performance-enhancing substances, and the Play Healthy Awards, which recognizes youth coaches and student athletes who embody the spirit of teamwork and healthy, drug-free competition. Major League Baseball has supported the Partnership for Drug-Free Kids’ message over the last several years with more than $42 million in media exposure and grassroots initiatives to build awareness for the perils of performance-enhancing drug and steroid use.

The 25th annual Partnership Attitude Tracking Study (PATS) of 3,705 teens in grades 9-12 and 750 parents is nationally projectable with a +/- 2.1 percent margin of error for the teen sample and +/- 3.6 percent for the parent sample. Conducted for the Partnership at Drugfree.org and MetLife Foundation by GfK Roper Public Affairs & Corporate Communications, the 2013 PATS teen survey was administered in private, public and parochial schools, while the parent survey was conducted through in-home interviews by deKadt Marketing and Research, Inc.

I don’t know that taking HGH would even be helpful for kids.
A) your levels are already pretty high and there’s no proof that jacking up HGH beyond normal levels is at all helpful
B) you risk shutting down HGH production at a pretty important time of your life
C) HGH is expensive and I highly doubt anything like 11% of teens are on it.

Why are your numbers for steroid use so much higher than those from Monitoring the Future?
http://www.monitoringthefuture.org/pubs/monographs/mtf-overview2013.pdf
How do you select your samples?

hi, good info to review, but forgive me but it would be more conviencing if you mentioned some of the negative effects of using steroids. I have been trying to find more info about HCG because my short stature 19 yo who is only 5’2” after Total body radiation would love another inch or two and he looks like a normal 14 yo. His MD’s are very reluctant which is driving me crazy .
Any answers to this?
Kate

Thank you for producing such a significant report that should serve as a strong warning to all involved with the education of young people. Sadly, we have far too many who are either performers or those who lead young people (teachers, coaches, etc.) who seek immediate results to further the dreams of success. Our society often feels that success at any price is worth the actions that can be taken, and are promoted through totally misleading and predatory marketing practices.
Those of us in positions to influence teachers, coaches, and young people (as well as their parents and the communities), must do all in our power to reverse the trends.
As we have no long-term studies that describe changes that may be likely to affect health in later life for those who use these products, all efforts should be made to develop policy and practices that will eliminate this harmful practice.