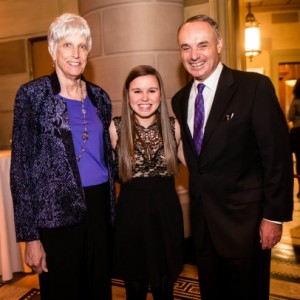 Judged by a panel of parents, coaches and sports industry professionals, Coach Fitts and Barrett were selected from a competition across the United States, Canada and Puerto Rico for their dedication to fair, drug-free play and an overall healthy lifestyle. Winners were chosen based on their commitment to leadership, sportsmanship and encouragement of others, on and off the playing field.

A coach and physical education teacher for more than 30 years, Joanne Fitts currently coaches volleyball at North Kingstown High School in Rhode Island. She has presented workshops stressing the importance of staying drug free, and in June, she was named Rhode Island’s Coach of the Year. Joanne is battling breast cancer for the second time, however, despite her diagnosis, she continued to coach the high school boys’ volleyball team and won the state championship.

Kelsey Barrett is a track and field athlete from Gardiner, Maine, and has a very personal connection to this issue. When she was seven years old, she lost her dad to substance abuse. As a teen, Kelsey has helped to implement a variety of service projects to keep youth healthy and active at the Boys & Girls Club of Greater Gardiner.

Recently, she faced a challenge when her school’s indoor track team was cut and found a way to practice and compete with a nearby school. Though running for another school was not ideal, she encouraged her teammates to participate and they made it all the way to the State Championship track and field meet. Kelsey has received both the Governor’s Service Award and Healthy Maine Communities Youth Advocate Award for her community work.

“Major League Baseball is thrilled to help recognize Coach Joanne Fitts and Kelsey Barrett, both of whom inspire their teams and communities,” Baseball Commissioner Allan H. (Bud) Selig said. “We are proud to work together with the Partnership for Drug-Free Kids in order to reach young people, who are the heart of our game, and impart to them the importance of clean living, fair competition and helping others.”

“There are exceptional individuals who go above and beyond as leaders in their sport. These unsung heroes rarely get the recognition they so richly deserve, despite the profound impact they have on your lives and in their community. That’s why it is so important to recognize Joanne Fitts and Kelsey Barrett,” said Steve Pasierb, President and CEO of the Partnership for Drug-Free Kids. “The annual Play Healthy Award further proves that our partners at MLB are dedicated champions for our work on behalf of kids and families. Together, it is a privilege to award two people who represent success in healthy sport and life.”

The two winners received a trip to New York City for themselves and one special guest, two tickets each to the Partnership for Drug-Free Kids’ annual gala, a $500 sporting goods store gift card and a commemorative plaque. Both winners will be featured prominently on drugfree.org.

The Commissioner’s Play Healthy Awards are a culmination of comprehensive nationwide efforts by MLB and the Partnership for Drug-Free Kids, including the Play Healthy website, to educate families on the risks of steroids and performance-enhancing substances and to recognize youth coaches and student athletes who embody the spirit of teamwork and healthy, drug-free competition. Major League Baseball has supported the Partnership’s message over the last several years with more than $42 million in media exposure and grassroots initiatives to build awareness for the perils of performance enhancing drug and steroid use. Join the conversation about our Play Healthy efforts, by following #playhealthy on social media.

The Partnership for Drug-Free Kids is dedicated to reducing teen substance abuse and supporting families impacted by addiction. We develop public education campaigns that drive awareness of teen substance abuse, and lead teen-targeted efforts that inspire young people to make positive decisions to stay healthy and avoid drugs and alcohol. On our website, drugfree.org, and through our toll-free helpline (1-855-DRUGFREE), we provide families with direct support and guidance to help them address teen substance abuse. Finally, we build healthy communities, advocating for great access to adolescent treatment and funding for youth prevention programs. As a national nonprofit, we depend on donations from individuals, corporations, foundations and the public sector and are thankful to SAG-AFTRA and the advertising and media industries for their ongoing generosity. We are proud to receive a 4-star rating from Charity Navigator, America’s largest and most-utilized independent evaluator of charities.