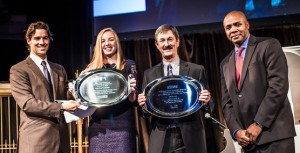 Judged by a panel of parents, coaches and industry professionals, Coach Vicini and Martinen were selected as part of a nationwide competition for their dedication to fair, drug-free play and an overall healthy lifestyle. Winners were chosen based on their commitment to leadership, sportsmanship and encouragement of others on and off the playing field.

Vicini, has been a volunteer coach of the Tri-City Little League in Harlan County and other teams for over 34 years and strives to teach his young athletes how to play fairly, make good decisions and to have healthy fun in the process. He serves as Coalition Coordinator for Operation UNITE, an anti-drug organization serving the eastern district of Kentucky, and works with youth and local coalitions. As part of his role, Tom works with local community coalitions and assists with youth programming that encourages youth to make wise choices. In his additional free time, Tom also organizes free youth baseball camps and other programs including the Shoot Hoops Not Drugs camp and Hooked on Fishing-Not On Drugs.

Student-athlete Abby Martinen excels at several sports including soccer, ice hockey, and lacrosse. Her passion for sports drives her passion to motivate other teens to stay away from drugs and alcohol. She mentors young players and is a leader in an underage drinking and anti-drug program called Dover Youth to Youth, where she has been a part of over 40 drug prevention projects. She has created her own local radio public service announcements to spread awareness about the dangers of underage drinking. Abby coordinated a group of 50 younger students in conducting an informational demonstration in downtown Dover highlighting the risks of prescription drug abuse. In 2011, she was selected to be on the New Hampshire Legislative Youth Advisory Council and this year she became a member of the National Youth Leadership Council which helps organize and plan the Underage Drinking Enforcement Training Center’s National Leadership Conference.

“Major League Baseball is proud to recognize the extraordinary efforts of Coach Tom Vicini and Abby Martinen, outstanding role models who have raised awareness about the dangers of drugs and alcohol among our youth,” said Baseball Commissioner Allan H. (Bud) Selig. “Standing alongside the Partnership for Drug-Free Kids, Major League Baseball is committed to emphasizing the inherent value of teamwork, healthy living and fair play. I congratulate Tom and Abby and I thank them for setting positive examples in their communities.”

“In this life there are individuals who give of themselves, their time and their talent to help make other’s lives better. Yet these extraordinarily persons often don’t receive recognition for their selfless contributions. Those facts make it an especially high honor to recognize two local heroes, Tom Vicini and Abby Martinen,” said Steve Pasierb, President and CEO of the Partnership for Drug-Free Kids. “The annual Play Healthy Award is further proof that our partners at MLB are steadfast advocates for our work on behalf of children. Together, The Partnership and MLB are proud to commend two people who embody leadership in encouraging both healthy sport and success in life.”

The winners received a trip to New York City for themselves and one special guest, two tickets each to the Partnership for Drug-Free Kids’s annual gala, a $1,000 sporting goods store gift card and a commemorative plaque. Both winners will be featured prominently on drugfree.org.

The Commissioner’s Play Healthy Awards are a culmination of both organizations’ comprehensive nationwide efforts, including the Play Healthy website, to educate families on the risks of steroids and performance-enhancing substances and to recognize youth coaches and student athletes who embody the spirit of teamwork and healthy, drug-free competition. Major League Baseball has supported the Partnership for Drug-Free Kids’s message over the last several years with more than $42 million in media exposure and grassroots initiatives to build awareness for the perils of performance enhancing drug and steroid use. Join the conversation about our Play Healthy efforts, by following #playhealthy on social media.