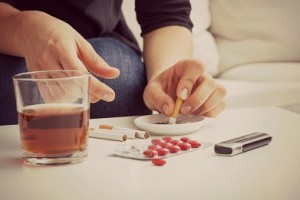 Use of several illicit drugs – including MDMA (known as Ecstasy or Molly), heroin, amphetamines and synthetic marijuana – showed a noted decline in this year’s data. The MTF study also noted that teen use of both alcohol and cigarettes reached their lowest points since the study began in 1975. Marijuana use among our nation’s youth remained stable; though teens’ perception of risk associated with marijuana use continue to soften.

MTF also found that misuse and abuse of prescription (Rx) drug​s among 12th­ graders has shown a gradual decline since 2005, when annual prevalence was at 17 percent. This year’s data included a non-statistically significant further decline in 2015 from 14 percent to 13 percent among high school seniors in the U.S. That means that more than 1 in 10 high school seniors has abused a prescription drug at least once in their lifetime. (In the MTF study, prescription drug abuse is measured with an index that includes use of narcotics, sedatives, tranquilizers and/or amphetamines without medical supervision and only 12th­ graders report on their use of all of these drugs).

“The recent declines in the abuse of prescription pain medicines among teens are encouraging. The Partnership has been working for quite some time through both our Above the Influence program and the Medicine Abuse Project to help educate teens, parents and communities about the risks of medicine abuse and we are glad to see continued progress,” said Marcia Lee Taylor, President and CEO of the Partnership for Drug-Free Kids. “The persistently high percentage of teens abusing Adderall is certainly a cause for concern, however, the Partnership will be focusing on that behavior in the coming year with a new documentary to educate parents and communities about teen use of prescription stimulants like Adderall to cope with stress and pressure to succeed.”

Added Taylor, “While today’s news about substance use among teens is mostly positive, we cannot let that take our focus off of the prescription drug and heroin crisis among other age groups. As a country, we need to focus more of our attention and resources on prevention and early intervention, rather than cleaning up a problem once it has reached epidemic levels.”

Marijuana Use Remained Stable Among Teens in the U.S.

Marijuana, the most widely used illicit drug, did not show any significant change in annual prevalence this year in any of the three grades, nor in the three grades combined. After rising for several years, the annual prevalence of marijuana use among teens has leveled out since 2010. Perception of risk associated with marijuana use continues to decline, however, moving from 36.1 percent of high school seniors saying use was harmful to only 31.9 percent this year.

In 2015, 12 percent of 8th ­graders, 25 percent of 10th­ graders and 35 percent of 12th­ graders reported using marijuana at least once in the past year. Of more importance, perhaps, is teens’ daily or near­ daily marijuana use (defined as smoking marijuana on 20 or more occasions in the past 30 days). These rates stand at 1.1 percent, 3 percent and 6 percent in 8th, 10th and 12th grades, respectively. And for the first time ever, daily marijuana use exceeds daily tobacco use among 12th graders.

Above the Influence (ATI) is a popular and proven-effective drug and alcohol prevention initiative created for American youth. With an online community of over 1.5 million young people, the program has an active, robust audience. ATI is the only prevention program of its kind that exists in the U.S. for American teens and there is no other initiative that works to prevent substance abuse and addiction on a national level.

The Partnership spearheads all national youth outreach, including advertising, social media and campaign websites for Above the Influence. ATI’s positive impact has been documented in several studies published in respected peer-reviewed journals including American Journal of Public Health and Prevention Science.

To learn more about the Above the Influence program, visit abovetheinfluence.com.

With the ultimate goal of preventing half a million teens from abusing medicine, the Partnership for Drug-Free Kids continues the momentum of the Medicine Abuse Project, a multi-year national mobilization program to help educate parents, teens and the public about the dangers of medicine abuse. Launched in 2012, the Project aims to drive awareness and action, encouraging parents to safeguard the medications in their home, track quantities and talk with their families about the dangers of medicine abuse.

Visit drugfree.org/MedicineAbuseProject and learn what role you can play in ending the teen medicine abuse epidemic.

The Partnership for Drug-Free Kids is dedicated to reducing substance abuse among adolescents by supporting families and engaging with teens. We develop public education campaigns that drive awareness of teen substance abuse, and lead teen-targeted efforts that inspire young people to make positive decisions to stay healthy and avoid drugs and alcohol. On our website, drugfree.org, and through our toll-free helpline (1-855-DRUGFREE), we provide families with direct support and guidance to help them address teen substance abuse. Finally, we build healthy communities, advocating for greater access to adolescent treatment and funding for youth prevention programs. As a national nonprofit, we depend on donations from individuals, corporations, foundations and the public sector and are thankful to SAG-AFTRA and the advertising and media industries for their ongoing generosity. We are proud to receive a Four-Star rating from Charity Navigator, America’s largest and most-utilized independent evaluator of charities, as well as a National Accredited Charity Seal from The Better Business Bureau’s Wise Giving Alliance.

About the Monitoring the Future Study

The annual Monitoring the Future study tracks trends in substance use by surveying 40,000 8th-, 10th,- and 12th- grade students located in approximately 400 public and private secondary schools across the country. Now in its 41st year, MTF is conducted by a team of research professors at the University of Michigan and is sponsored by the National Institute on Drug Abuse.