Suggesting Treatment to a Loved One

Our loved ones may already be expressing a willingness to get help. Learn what to listen for and and how to respond productively.

Deaths from overdoses reached a staggering 100,300 in the 12-month period ending in April 2021. This represents nearly a 30% increase over the previous time period and was largely driven by fentanyl. While some people seek out fentanyl, others unknowingly consume it as heroin, methamphetamines, cocaine, MDMA, and counterfeit pills including pain medications, Adderall, and Xanax have been laced with it.

As a concerned parent, whose top priority is keeping your child safe — and alive — the following are the most important things to understand about fentanyl.

1. Fentanyl is 50 to 100 times more potent than heroin or morphine.

2. It is relatively cheap to produce, increasing its presence in illicit street drugs.

Dealers use it to improve their bottom line. According to a report from the Office of National Drug Control Policy, evidence suggests that fentanyl is being pressed into pills that resemble OxyContin, Xanax, hydrocodone and other sought-after drugs, as well as being cut into heroin and other street drugs. A loved one buying illicit drugs may think they know what they’re getting, but there’s a real risk of it containing fentanyl, which can prove deadly.

3. Naloxone (Narcan) will work in case of overdose, but extra doses may be needed.

Because fentanyl is far more powerful than other opioids, the standard 1-2 doses of naloxone may not be enough. Calling 911 is the first step in responding to any overdose, but in the case of a fentanyl-related overdose the help of emergency responders, who will have more naloxone, is critical. Learn more about naloxone and responding to opioid overdose >>

4. Even if someone could tell a product had been laced with fentanyl, it may not prevent their use.

Some individuals claim they can tell the difference between product that has been laced with fentanyl and that which hasn’t, but overdose statistics would say otherwise. Some harm reduction programs are offering test strips to determine whether heroin has been cut with fentanyl, but that knowledge may not be much of a deterrent to a loved one who just spent their last dollar to get high.

5. Getting a loved one into treatment is more critical than ever.

If you need help in determining a course of action, please reach out to one of our parent specialists. 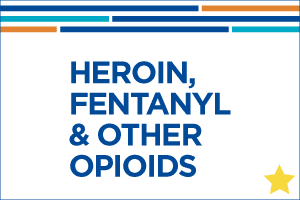 Understanding the Opioid Epidemic & What You Can Do

Get all of our resources and information on protecting your community and helping a loved one together in our latest eBook.

Get the eBook now

Parent support specialists are available to listen, answer questions and help you create a plan to address your child's substance use.