What Parents Need to Know About College Binge Drinking

The feeling of sending a grown child off to college for the first time can be described as a strange mixture of pride, relief and severe anxiety. What do parents need to know as their adult child takes this big step? As a public health researcher, I have some good news to share, and some reminders about what to be aware of during this critical transition for both you and them.

The first piece of good news is that your voice matters. Your child might not tell you, but when researchers have asked them about your influence, they find that parent attitudes and the rules you put in place during their development are major influences on their risk-taking behavior. Preparing and protecting your child from engaging in excessive drinking during college starts way before “drop-off” day. Even in middle school, and throughout high school, sending a clear message of your disapproval for underage drinking is critical and equally important in college.

To some parents, it might be tempting to think that you can “teach” your child how to drink responsibly by allowing them to drink before going to college. Many parents also think that not allowing their children to drink turns alcohol into “forbidden fruit,” increasing the child’s interest in drinking. Instead, research has shown that having parents who communicate clear expectations against using alcohol during high school is associated with a lower chance of drinking excessively during college.[1]

What is binge drinking?

During the past decade, the percentage of students who reported a “binge” level of drinking at least once over a two week period decreased from 40 percent to 32 percent.[3] This amount of alcohol is associated with numerous adverse health and safety consequences. Keep in mind, though, that even at a legal drinking age, the health guidelines suggest that on the days that they do drink, females should limit their consumption to one drink and males should limit their consumption to two drinks, as alcohol use has been linked to a weakened immune system and an increased risk for injuries, high blood pressure, stroke, and certain types of cancer, such as oral, throat, liver and breast cancer.[4]

Why do kids binge drink?

Many parents ask, “Why do students continue to drink to excess when they clearly know it is risky?” There is no simple answer to that question, but here are a few things to think about. First, we know that adolescent and young adult brains are “primed” for risk-taking and exploratory behavior — some more than others. But in general, college students are likely to focus on immediate rewards and an experience that might make a “good story” later rather than think about the possible consequences of their behavior. Unfortunately, the consequences of this sort of behavior can change a life trajectory very quickly.

A second driving force behind excessive drinking behavior is the perception that it is normative and accepted — the idea that “everyone is doing it” — when in fact it’s a minority of students. Many schools try to send messages about the relative rarity of very heavy consumption of alcohol to correct these misperceptions by students.

Third, there are many individual-level factors that heighten one’s risk for binge drinking, like being impulsive, or having a tendency to break rules. Lastly, the availability of alcohol is key. For example, where there is widespread access and low prices, there will be a greater likelihood that students will engage in heavy drinking as compared with places where access is more limited.

How do I talk about binge drinking?

When your child leaves for college, maintaining open, regular communication can help you understand what kinds of drinking opportunities exist on campus and in the surrounding community. Setting a regular time to talk, such as every Sunday afternoon, can be helpful. The communication should send a clear message that you expect them not to drink. However, not every conversation needs to be explicitly about alcohol. Check in with them about their friends, roommates and classes to get a sense of what’s going on in their lives. This is especially important during the first few weeks of college, as this is the biggest time of transition, but conversations should continue throughout their college career.

In addition to being a sounding board for them, your knowing what’s going on in their life can help with identifying warning signs of an alcohol problem. Asking about how often they are going to class, whether or not their sleep schedule is disrupted, and/or whether or not they have been able to concentrate well are possible conversation starters because all of these issues can be related to drinking too much or using other drugs. If you suspect that your child might have an alcohol problem, identify the resources available on campus. Although it varies by school, some colleges have clinicians on campus who can assess your child for an alcohol problem and refer, if needed, to treatment options. Suspecting that your child has an alcohol problem can be very upsetting, but it’s best to have this conversation in person while keeping a calm and supportive tone. The main point is that as a parent, you see how much personal and professional potential they have, and you know that underage and excessive drinking and drug use during college can be very distracting and get in the way of fulfilling their potential.

For more tips on starting the conversation about alcohol with your child, please visit www.collegeparentsmatter.org. 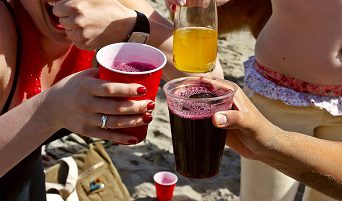 We break down the risks of underage drinking, why it appeals to young people and what you can do to protect your child from its harms.

We break down the risks of underage drinking, why it appeals to young people and what you can do to protect your child from its harms.

Download now
How to Address Alcohol and Underage Drinking

What do you do, and what can you say if your child has been caught drinking?