When I’m Running Out of Energy, I Think of Others Who Have Struggled with Addiction

Not long after my license was revoked, my son, Dominick, asked me why his mom had begun driving instead of me. I responded honestly, telling him that, just like when he broke the rules and had his toys taken away, I had lost my license because I was drinking and driving, and that wasn’t okay. He’s now 11, and some day, I’ll share my full story with him.

I grew up in West Chester, PA, the child of supportive parents who ensured I never wanted for anything. In high school, I experimented with marijuana, ecstasy, mushrooms and cocaine. Looking back, this was my way of coping with life stressors, anxiety and depression.

In college, my roommate introduced me to Oxycontin, and what started as a casual thing – playing Xbox, getting high with my friends – turned into a need. Oxycontin is an incredibly potent substance, and I was physically dependent on it. My life spiraled out of control: my roommate had gone down a dark path, my girlfriend at the time had moved away and I found myself in a place I had never been before. I realized that my lifestyle was not sustainable. Two months before the start of summer break, I walked into a methadone clinic and said to the receptionist, “I have 50 days to get off of this. I don’t have the time or desire for this to be in my life anymore.” A month and twenty days later, I took my last tapered dose of methadone and haven’t touched an opioid since. I was fortunate to be able to return home, where I had the support of my family and friends.

However, even though I was no longer using opioids, I had found a substitute in alcohol and cocaine. I found myself leaning on substances more than ever in order to cope. The years went by and the constant cycle of work, party, make bad decisions and repeat was in full effect. Life has an interesting way of giving you awakening moments. I found out I was going to be a father, and my life took on a new and exciting chapter. Even with the birth of my son, I was still in this “Peter Pan” syndrome and did not want to grow up. I would fulfill my parental responsibilities, but when I was by myself, I was making up for lost time. I was in a cycle of substance use, with no end in sight.

Then came March 1, 2015. The turning point. The day I used to refer to as the worst day of my life. I was arrested in New Jersey for drug possession and charged with my second DUI. My car was totaled and my license revoked. I will never be able to forget telling my parents and the mother of my child that my irresponsible actions were negatively affecting our family and that I could very well face jail time.

It was that day that I kissed my old life goodbye.

I began working my way toward a life of appreciation and gratitude. I knew, just as I knew in college, that my current lifestyle was not sustainable. During this time, my family stayed solidly behind me, and told me that they did not want me to suffer by myself. They told me that we would get through it together. I also looked at my son, who was only five at the time, and knew that it was my job to keep him on the right path. He was, and is, my biggest inspiration.

Two years later, during a time of transition in my life, I took up running. At first, I would only run on a treadmill at the gym: I was in between jobs and wanted something that would keep me away from the ways I used to cope with stress. After a long day, I used to pop a pill and pour myself a whiskey – but I didn’t have that outlet anymore, nor did I want to return to it. I began running more, joining a friend who was also in recovery from substance use. Running was a release. When I first took it up, it relieved me of the anxiety that was building up in my life.

One of my biggest accomplishments was running two half-marathons in one week, and the very next year, taking on the Philadelphia Marathon and finishing in under four hours. I realized how much I loved accomplishing these goals, beating my previous times and earning medals – but I was also running to end the negative stigma surrounding substance use. Whenever I was in the middle of a race, when I was running out of energy, I thought of the people in my life who had struggled with addiction, like my childhood neighbor who passed away following an opioid overdose. 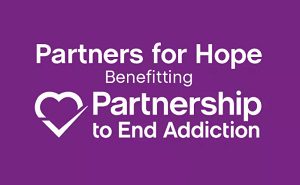 Jason is a member of our #PartnersforHope TCS New York City Marathon Team. Meet the team, learn their stories and lend your support.

My first half marathon was the Philadelphia Love Run. After crossing that finish line, I felt nothing but love from my family and friends, but more importantly, all friends shining down from heaven that I’ve lost over the years. I counted my blessings to be able to help others in this world that are suffering in silence. I’m so appreciative now to prepare for the TCS New York City Marathon as part of Partnership to End Addiction’s Partners for Hope team.

Today, for Dominick, I see it as my responsibility to keep him away from the path that I took those years ago, and with this responsibility comes the need for honesty and communication. I am always working – and running – to ensure that he does not make the same mistakes that I did.

Jason is in long-term recovery and an active runner preparing for the TCS New York City Marathon as a member of our Partners for Hope Team.