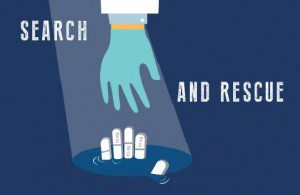 “Search and Rescue” Program Piloted in Maryland and Rhode Island

The Partnership for Drug-Free Kids, a nonprofit dedicated to reducing teen substance abuse and supporting families impacted by addiction, has introduced a new campaign targeting healthcare professionals as part of its Medicine Abuse Project. This education effort, supported by a multi-year grant from the U.S. Food and Drug Administration (FDA), recognizes the key role healthcare professionals play in prescribing responsibly, communicating the risks of misuse and abuse, and identifying and helping patients who may already be misusing or abusing medication.

According to the Centers for Disease Control (CDC), enough prescription pain relievers were prescribed in 2010 to medicate every American adult continually for a month. Since 1999, overdose deaths involving prescription painkillers have quadrupled, says a 2013 report from the National Institute on Drug Abuse (NIDA).

“Preventing prescription opioid abuse is a very high priority for the FDA,” said Douglas Throckmorton, M.D., deputy director for regulatory programs in the FDA’s Center for Drug Evaluation and Research. “We are committed to supporting broader prescriber education, one essential tool for encouraging the safe use of opioids.”

The prescriber campaign, titled “Search and Rescue,” was developed by communications agency ICC Lowe working in close collaboration with the Partnership and FDA. The campaign is particularly targeted to family physicians and pain specialists in an effort to raise their awareness of prescription drug abuse and encourage them to use basic assessment tools that can help stem the tide of prescription drug misuse and addiction.

In the first year of the FDA grant, the Partnership engaged Harris Interactive to conduct in-depth interviews with prescribers, focusing on their current beliefs and behaviors relating to prescription drug misuse and addiction. “What we found were low levels of awareness among many prescribers that non-medical use of prescription drugs could be a problem in their practices, and very low utilization of effective prevention tools such as Prescription Drug Monitoring Programs (PDMPs) or in-office screenings to identify patients at risk of abuse or addiction,” said Sean Clarkin, Director of Programs at the Partnership. “We also learned that the best, most credible messengers for this educational campaign would be other prescribers.”

Rhode Island and Maryland were selected as pilot markets for the campaign because of their relatively high prevalence of non-medical use of prescription pain relievers, and because the Partnership identified leaders in the medical community in each state who embraced the initiative.

“Prescription drug misuse and addiction are reaching alarming proportions throughout the United States and Rhode Island. More Rhode Islanders die from prescription drug overdoses than any other form of accidental death. We need to take action now and this campaign is an excellent step toward solving this critical problem,” said Michael Fine, M.D., Director of the Rhode Island Department of Health.

“This is a significant public health issue that prescribers cannot ignore, no matter the patients they see or the setting where they practice. We all need to be part of the solution and the Search and Rescue Campaign is a great way to begin learning how,” said Yngvild Olsen, MD, MPH, Medical Director, Institutes for Behavior Resources/REACH Health Services.

During this campaign, a series of compelling, highly targeted e-newsletters and strategically placed banner ads will drive prescribers to a state-specific “Search and Rescue” website. Here, in addition to statistics on prescription drug abuse in Maryland and Rhode Island, and videos of influential local physicians introducing the campaign, prescribers will also gain access to tools and resources that can help identify and address prescription drug misuse and abuse within their practices.

Individual dedicated websites for each state will provide a full “Search and Rescue Action Kit,” comprised of easy-to-use tools that will help prescribers identify prescription drug misuse and addiction in their practices. The state web pages will also include short introductory videos featuring a key peer leader from each state (in Maryland, Dr. Yngvild Olsen, Medical Director at the Institutes for Behavior Resources in Baltimore; in Rhode Island, Dr. Michael Fine, Director of the Rhode Island Department of Health), as well as educational information and links to the key tools for prescribers to familiarize themselves with and adopt to take local action.

“Search and Rescue” is part of The Medicine Abuse Project, the Partnership’s multi-year effort to prevent teen abuse of prescriptions drugs and over-the-counter cough medicine. Launched in 2012, the Project aims to curb the abuse of medicine, the most significant drug problem in the United States today, and one which the CDC classifies as an epidemic. It encourages parents, stakeholders and the public to take action: first, by talking with their kids about the dangers of abusing medicine, and second, by safeguarding and properly disposing of unused medications.

This work was supported by the U.S. Food and Drug Administration, Center for Drug Evaluation and Research under grant number 1U18FD004593. The content is solely the responsibility of the Partnership and does not necessarily represent the official views of FDA or the U.S. Department of Health and Human Services.