National Study Confirms Teen Drug Use Trending in Wrong Direction: Marijuana, Ecstasy Use Up Since 2008, Parents Feel Ill-Equipped To Respond

New York, NY – April 6, 2011 – Following a decade of steady declines, a new national study released today by the Partnership for Drug-Free Kids and MetLife Foundation indicates that teen drug and alcohol use is headed in the wrong direction, with marked increases in teen use of marijuana and Ecstasy over the past three years. The 22nd annual Partnership Attitude Tracking Study (PATS), sponsored by MetLife Foundation, affirms a disturbing trend that has emerged among American teens since 2008 and highlights that as underage drinking becomes more normalized among adolescents, parents feel unable to respond to the negative shifts in teen drug and alcohol use.

The new data underscore alarming patterns in early adolescent alcohol use and found that teens view drinking alcohol – even heavy drinking – as less risky than using other substances. 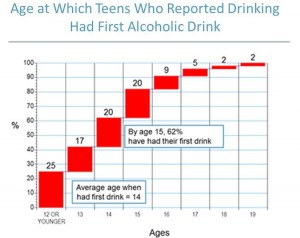 • Of those teens who reported alcohol use, a majority (62 percent) said they had their first full alcoholic drink by age 15, not including sipping or tasting alcohol.

• Of those teens who reported alcohol use, one in four (25 percent), said they drank a full alcoholic drink for the first time by age 12 or younger.

• Among teens who reported drinking alcohol, the average age of first alcohol use was 14.

“As teen drug and alcohol use take a turn for the worse, a heavier burden is placed squarely on the shoulders of parents – who need to take an active role in preventing substance abuse in their families, take action if they suspect their child is using and get immediate help for a child who has developed a problem with drugs or drinking,” said Steve Pasierb, President and CEO of the Partnership for Drug-Free Kids. “We are troubled, but not completely surprised, by these numbers because, in schools and communities across the country, support for drug education and prevention programs has been cut drastically due to budgetary pressures.”

Weak perceptions of risk and a perceived “normalization” of underage drinking underlie the PATS survey data on adolescent alcohol use.

• Almost half of teens (45 percent) reported they do not see a “great risk” in heavy daily drinking.

• Only 31 percent of teens strongly disapprove of teens and peers their age getting drunk.

• A majority of teens, seven out of 10 (73 percent), report having friends who drink alcohol at least once a week.

• One in three (32 percent) teens said they drank “to forget their troubles.”

• Almost one in four (24 percent) said they used alcohol to help them “deal with problems at home.”

• One in five (20 percent) teens reported they drank to “deal with the pressures and stress of school.”

It’s important to note that teens who begin drinking before the age of 15 are much more likely than other teens to develop problems with alcohol as adults.

The PATS survey also found that parents feel unprepared to respond to underage drinking by their children. Almost a third of parents (28 percent) feel “there is very little parents can do to prevent their kids from trying alcohol.” One in three teens (32 percent) thinks their parents would be ok if they drank beer once in a while; yet only one in ten parents agrees with teens drinking beer at a party.

“These findings should serve as a call to action for parents,” said Dennis White, President and CEO of MetLife Foundation. “We encourage parents and caregivers to pay attention to the warning signs of teen drinking and other drug use, in order to intervene early and effectively. If you suspect a problem, do not wait to get help for a child who is struggling with substance abuse or addiction.”

Time To Get Help: Resource to Help Parents Intervene and Get Treatment for Addiction in Their Families

For parents who suspect or know their child is using drugs or alcohol, the Partnership for Drug-Free Kids created Time To Get Help, a first-of-its-kind website and online community to provide parents of teens and young adults with lifesaving information when families are in crisis and facing a child’s addiction.

With teen drug and alcohol use on the rise, the likelihood that more young people will need treatment increases. Of the nine million American teens and young adults needing treatment, two million are between the ages of 12-17, and ninety percent of those are not getting the help they need.

Time To Get Help offers parents and caregivers comprehensive insight into adolescent alcohol and drug abuse, dependence and addiction; support from top experts and other parents who have been there; and treatment options for their child and family.

According to the PATS survey, teen abuse of prescription (Rx) medicines continues to be an area of major concern, with abuse rates holding steady and at levels that should be worrisome to parents. The data found one in four teens (25 percent) reported taking a prescription drug not prescribed to them by a doctor at least once in their lives, and more than one in five teens (23 percent) used a prescription pain reliever not prescribed to them by a doctor. Teen past-year use of over-the-counter (OTC) cough medicine has remained at roughly one in ten (11 percent).

Teen smoking rates have remained stable with 27 percent of teens reporting smoking cigarettes in the past month. Among teens, past-year methamphetamine use is holding at 5 percent and cocaine/crack is at 9 percent. Teen use of heroin use remains low at 4 percent for lifetime use.

For more information, or to view the full PATS report and key findings, click here.

The 22nd annual national study of 2,544 teens in grades 9-12 and 831 parents is nationally projectable with a +/- 3.6 percent margin of error for the teen sample and +/- 3.4 percent for the parent sample. Conducted for the Partnership for Drug-Free Kids and MetLife Foundation by GfK Roper Public Affairs & Corporate Communications the 2010 PATS teen survey was administered in private, public and parochial schools, while the parent survey was conducted through in-home interviews by deKadt Marketing and Research, Inc.

the Partnership for Drug-Free Kids is a nonprofit organization that helps parents prevent, intervene in and find treatment for drug and alcohol use by their children. Bringing together renowned scientists, parent experts and communications professionals, this public health nonprofit translates current research on teen behavior, parenting, addiction and treatment into easy to understand resources at drugfree.org. The organization also reaches families through its community education programs which focus on local drug and alcohol issues of concern for parents, youth and the Hispanic community. the Partnership for Drug-Free Kids depends on donations from individuals, corporations, foundations and the public sector and is thankful to SAG/AFTRA and the advertising and media industries for their ongoing generosity.

For over 20 years, MetLife Foundation has provided support for initiatives focusing on substance abuse prevention and education. Since 1999, the Foundation has collaborated with the Partnership for Drug-Free Kids on a national public awareness campaign to help parents and caregivers communicate with children about the risks of drug use. MetLife Foundation was established in 1976 by MetLife to carry on its long-standing tradition of corporate contributions and community involvement. For more information about the Foundation, visit metlife.org.