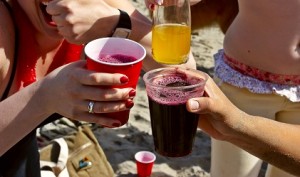 There are nine million full-time college students in the United States. On an average day, 2,179 full-time college students drank alcohol for the first time and 1,326 began using an illicit drug. The findings come from “A Day in the Life of College Students Aged 18 to 22: Substance Use Facts,” by the Substance Abuse and Mental Health Services Administration (SAMHSA).

“The findings show that college is the time when a lot of young people initiate substance use, and alcohol and marijuana are the most frequently initiated substances,” said Dr. David Dean, behavioral research scientist at SAMHSA. “There is a great deal of development that is still occurring during this age, particularly neurophysiological development, that can be inhibited by substance abuse.”

“These numbers are not new to us but they are alarming,” General Arthur Dean, Chairman and CEO of Community Anti-Drug Coalitions of America, told the newspaper. “We need to somehow change the social norms related to alcohol. Most young people believe that drinking is a rite of passage and that one has to drink to drink to fit in, but we know that it is not appropriate.”

Posting to social media while high and regretting it afterwards is a common problem, a new study suggests.