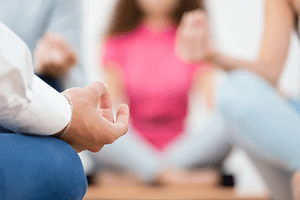 The practice of mindfulness, or paying attention “on purpose” to the present moment without judgment, may be helpful for people trying to reduce their dose of the opioid medication buprenorphine/naloxone (Suboxone), according to Zev Schuman-Olivier, MD, Medical Director for Addictions and Executive Director for the Center for Mindfulness and Compassion at the Cambridge Health Alliance.

Dr. Schuman-Olivier is co-leading a mindfulness-based group for individuals prescribed Suboxone to treat their opioid use disorder, who want to reduce the amount of medication they take, come off of it completely, or come to a place of acceptance with their medications. Of the first five people who participated in the program, three have reduced their buprenorphine dose, and two have been able to stop taking it completely with no relapse for six months with the help of another non-dependence forming addiction medication, naltrexone.

“There is controversy about whether patients should come off buprenorphine,” said Dr. Schuman-Olivier, who is also an instructor in psychiatry at Harvard Medical School. “I generally strongly encourage people not to come off the medication. Opioid addiction is a hormonal dysregulation that has come so far out of balance, so that for most people being on buprenorphine or methadone for life is appropriate. However, for people who want to reduce the amount they take because of a sense of stigma and shame about needing the medication, mindfulness can be helpful.” He said most people in recovery from opioid addiction need buprenorphine as much as people with diabetes need insulin.

Some people who take buprenorphine experience side effects such as sweating, mental fogginess, or sedation, Dr. Schuman-Olivier said. Lowering the dose can help reduce those symptoms.

He has been running a mindfulness group with patients who have been stable on buprenorphine for at least a year, without any other substance use. “They are feeling unsettled about the idea of being on buprenorphine forever,” he said. “We are trying to reduce that stress. For those who actually do need it and the alternative is certain relapse and potential overdose, then a goal of mindfulness training can be to help them accept that they need to take buprenorphine for the rest of their lives.”

Reducing buprenorphine can cause a host of side effects, such as increased stress and anxiety, difficulty sleeping, depression, and more sensitivity to pain. “Buprenorphine lessens the intensity of all these experiences or reduces their predisposition to have these symptoms,” Dr. Schuman-Olivier explained.

The program consists of 13 sessions lasting 90 minutes each. For the first month, the meetings are weekly, then stretch to every other week. For the first 30 minutes, participants talk about their medication, then for the next hour they practice a mindfulness exercise, such as being present in the moment while walking or eating, as well as becoming aware of sensations of craving in the body and of ruminative thoughts in the mind. “We talk about how you can be kind to yourself, to reduce self-judgment, because people struggling with addiction have a tendency toward self-criticism,” Dr. Schuman-Olivier said. If a person is going through a particularly stressful time, they may be encouraged to raise their dose for awhile.

After the six-month program, three of the participants reduced their buprenorphine dose and came to accept that they did not want to get off the medicine right away. “They realized they were blaming the medication for so many things,” he said. “Practicing mindfulness, they started feeling gratitude for what the medication had been doing for them.”

Schuman-Olivier’s program is based in part on a program called Mindfulness-Based Relapse Prevention (MBRP), which combines practices like sitting meditation with standard relapse prevention skills, such as identifying events that trigger relapse. Rather than fighting or avoiding the difficult states of mind that arise when withdrawing from a substance, this combination tries to help participants to name and tolerate craving and negative emotion.

A study published in 2014 compared MBRP with a standard relapse-prevention program and a conventional 12-step program. After six months, the mindfulness-based program and the standard relapse-prevention program were both more successful at reducing relapse than the 12-step program. One year later, the mindfulness-based program proved better than the other two in reducing drinking and drug use.

Dr. Schuman-Olivier and his colleague, Alaine Kiera Fredericksen, have started a new group with seven members, and including the initial five participants for ongoing support and continued reduction if they choose. “They can help the newer patients, and tell them what the process was like for them,” he said.

A participant in Dr. Schuman-Olivier’s program who successfully stopped taking buprenorphine says mindfulness has helped her learn to deal with the stresses that in the past led to impulsive behavior, such as taking drugs. “It was really important to me to have something in place that would help me to deal with intense emotions that feel like being on a rollercoaster you can’t get off of,” said the patient, Juvia Swan  (not her real name). “Drugs used to help me get off the rollercoaster, and now mindfulness allows me to do that. The breathing exercises and bodily observations let you slightly detach and observe your emotions, and de-escalate catastrophizing thoughts, such as ‘I’ll never be able to do this.’” Mindfulness, she says, “makes you more empowered to create changes within yourself.”

It took two years for her to gradually reduce, and then stop, her buprenorphine dose. She said, “I started at 12 milligrams, and the last two milligrams were the hardest –I really needed the group for that.”

What is mindfulness? Can it help teens de-stress? And how do you do it?

Medication-assisted treatment for opioid addiction is underused, according to a new study.