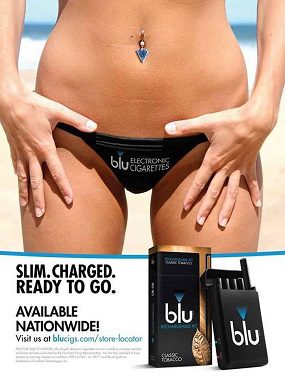 As a businesswoman who just recently made the transition from a 20+ year career in advertising to the field of public health, I recently came across this ad in the popular 2014 Swimsuit Issue of Sports Illustrated (SI) and have to say, immediately channeled my inner Amy Poehler. “Really?”

Is it really 2014 and we’re still seeing bad ads like this one obviously seeking to appeal to the myriads of young men who take part in the annual “gawk fest” that is SI’s most well-read issue of the year? And with a product that whose safety remains uncertain? “Really?”

Just months after the landmark U.S. Surgeon General’s Report on Smoking and Health observed its 50th anniversary with the headline that if we don’t find a way to end the tobacco epidemic, 5.6 million young people’s lives hang in the balance. “Really?”

While the evidence is mounting that e-cigarettes are less harmful than combustible forms of tobacco and may provide real benefits for adults who want to quit smoking, they have no business being used by or marketed to young people. Last month the U.S. Food and Drug Administration (FDA) announced a new proposed regulation that will take the very important step of instituting a national minimum age of 18 for the purchase of e-cigarettes, but it is critical that the regulation also prohibit marketing of these products to youth. By failing to apply the same marketing restrictions to e-cigarettes that exist for combusted cigarettes, they leave a gaping loophole for the continued and pervasive advertising of these products on television, online, in magazines, on cabs, everywhere.

A new Legacy report titled Vaporized: E-Cigarettes, Advertising, and Youth, examines this recent rise of e-cigarette use among youth, and the entry of the major tobacco companies into the e-cigarette market. Our report provides further evidence for the rapid implementation and expansion of the recently announced deeming regulations by the FDA. E-cigarette usage is exploding, with a doubling of e-cigarette use from 2011 to 2012 among middle and high school students and adults (18-34), according to the Centers for Disease Control (CDC) figures. If current trends continue, U.S. sales of e-cigarettes are expected to surpass $10 billion by 2017. Spending on advertising by e-cigarette companies has also risen sharply from $5.6 million in 2010 to $82.1 million in 2013 across all media channels. Furthermore, e-cigarette brands now use celebrity endorsements, event sponsorships and advertisements on cable television, print and web media as ways to promote their products. The findings are troubling:

This loophole allows companies like Lorillard – the same folks that bring us the leading menthol cigarette brand, Newport, –to take us back to the “I’m Linda. Fly me!” days of objectifying women with sleazy, sexual innuendo to sell their products. As a woman and a marketer, I’m especially incensed by the sexualization of the young girl in this ad. The e-cigarette as the phallic symbol, the headless model being used to promote the product, the belly button jewelry with an arrow pointing to the very strategically-placed logo. And despite the fact that these companies claim they aren’t marketing to youth, ads like this one suggest otherwise. This ad is so wrong on so many levels, I hardly know where to begin. It’s shameful.

If the e-cigarette marketers want those of us in the public health community to take them seriously and believe they want to be part of the solution instead of one more part of the problem, not running awful ads like this one would go a long way toward convincing us.

The major tobacco manufacturers have been found guilty of racketeering, lying to the public about false health claims, the list goes on and on. So should we be surprised? Not really.

JUUL Use Among Older Teens and Young Adults Soars

Juul use among older teens and young adults soared between 2018 and 2019, according to a new study.

FDA to Ban Most E-Cigarette Flavors, but Makes Exception for Menthol

The Food and Drug Administration is expected to announce this week that it will ban most flavors of e-cigarette cartridges, but will exempt menthol and tobacco flavors.

Excellent article and this helps to point out, begs of the FDA to do its codified, established duty to address these companies and quickly establish safety and efficacy standards and regulations for these nicotine (drug) delivery devices.