Teens Abusing Prescription Drugs May Not Just Want to Get High, Research Suggests 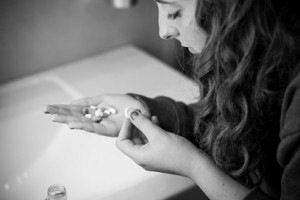 Many teens who use abuse prescription drugs are not trying to get high, but are using them to help them deal with an underlying problem such as anxiety, a newly published survey suggests.

“We think of teens as using drugs to party and to experiment,” says study co-author Barbara Delaney. “But because prescription drugs are designed to help with physical or emotional conditions, many teenagers are using them to help them with a specific problem, such as lessening anxiety, staying awake to study, or losing weight.”

The findings suggest the need for parents to understand physical or emotional problems their teen may be facing, which need to be addressed. “It’s not enough to simply tell them not to use drugs,” says Delaney, former Director of Research at the Partnership for Drug-Free Kids. “Parents need to understand what’s going on in their teens’ minds—what kind of stresses they feel.”

The survey included responses from more than 1,000 13- to 18-year-olds from around the country who were recruited in shopping malls. They completed a web-based questionnaire on their use of substances including alcohol, tobacco, and both legal and illegal drugs. They were also asked whether they struggled with anxiety, felt a desire to be popular, sought out exciting activities, and what level of risk they associated with prescription drugs.

The researchers found one factor that affected teens’ use of prescription drugs was the need to feel popular. “Wanting to fit in with your peers is connected to anxiety,” Delaney said. The use of other restricted substances, such as alcohol, also increased the risk of prescription drug abuse.

“Adults spotting teens with very high levels of anxiety and at least moderate use of other restricted substances should realize that these are students with a high likelihood of prescription drug abuse,” the authors wrote in the Journal of Public Policy & Marketing.

The researchers found 20 percent of teens reported they had a friend that abused prescription drugs. They identified prescription drugs as a new tier of drug abuse after the traditional “starter drugs” such as beer/wine, cigarettes, liquor, and marijuana.

The survey found teens felt that prescription drugs were less risky to use than street drugs. “Previous research has found a teen’s decision about whether to try a drug is strongly associated with their perception of the drug’s risk,” she noted. “They think, ‘How risky can it be if these drugs are prescribed by doctors?’” Public education campaigns need to better communicate the risks associated with prescription drug abuse, the researchers conclude.