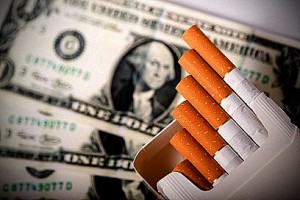 Smokers burn through an average of $1.4 million in personal costs, a new study concludes. The figure includes spending on cigarettes, medical costs and lower wages brought on by smoking and exposure to secondhand smoke, CBS News reports.

The study, which appears on the website WalletHub, calculated the cumulative cost of a cigarette pack per day over several decades. For their calculations, the researchers assumed an adult starts smoking a pack of cigarettes per day beginning at age 18, and smokes for 51 years—taking into account that 69 is the average age at which a smoker dies.

The researchers then calculated how much smokers would have earned if they had invested their cigarette money in the stock market instead.

Tobacco costs average $1.03 million after a lifetime of smoking, the study found. In states where taxes are lower, including many Southern states, the lifetime cost of purchasing cigarettes was much lower than the country’s average.

Quitting “saves you the money of not buying a pack, but you don’t realize how much you are saving in health care and insurance premiums,” said WalletHub spokeswoman Jill Gonzalez. “That is really what will impact people, seeing all of these prices added together.”