Resetting Household Rules Important for Teens With Substance Use Disorders 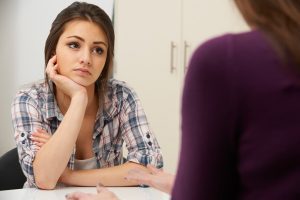 Setting new household rules for teens in treatment for a substance use disorder can be challenging for parents. But it is important because research shows that teens do take their parents’ attitudes, opinions and beliefs into account when they make choices about substance use, says Christopher Hammond, M.D., Medical Director of the Johns Hopkins Co-Occurring Disorders in Adolescents (CODA) Clinic at Johns Hopkins Hospital in Baltimore, MD.

By the time families begin treatment for a teen’s substance use disorder, parents are often emotionally drained and burnt out, says Dr. Hammond, who is also assistant professor of psychiatry at Johns Hopkins. “We tell parents that one of the major ways they can provide positive support for their teen’s recovery is by taking a close look at how they set and enforce rules in their house and consider resetting their household rules to promote abstinence,” he says. Not only will consistently setting and enforcing rules help their teen, but it can help the family as a whole and take some tension out of the household. Dr. Hammond spoke about working with parents and families to improve outcomes for teens with substance use disorder at the recent American Association of Addiction Psychiatry meeting.

It is very important for parents to firmly establish a rule prohibiting drug or alcohol use, even if they previously allowed their teen to drink or use drugs in the house alone or with friends. Dr. Hammond notes, “Being the ‘cool parent’ who lets teens drink at their house is not only illegal but also associated with poorer outcomes for teens in treatment for substance use disorders.” Allowing drug and alcohol use at home is associated with poorer outcome for teens who are in treatment.

Along with explaining the rules, parents need to tell their teen the rules are meant to keep them safe and healthy. “We tell parents to explain the impact of drug and alcohol use on teen brain development—there is no good reason for teens to be using drugs or alcohol.” He also urges parents to assign teens chores to give them a sense of responsibility.

They also need to make clear consequences for breaking rules. Inconsistent limit setting teaches teens to not respect their parent’s authority. It also teaches them not to trust that parents will follow through with consequences.

“A lot of parents I work with protect teens from the consequences of their behaviors,” Dr. Hammond notes. “Allowing this behavior is associated with poorer outcomes. Within the limits of safety, parents need to allow teens to experience the natural consequences of bad behaviors. For instance, if a teen gets drunk and misses their Saturday soccer game, I tell parents not to call the soccer coach and lie to them and say the teen was sick. Force the teen to approach the coach and experience the coach yelling at them for missing the game and benching them.”

Consequences for breaking rules on substance use can include restricting media access (including taking the teen’s phone away for a certain period) and taking away the car keys. “These are privileges, not rights,” Dr. Hammond says. “Parents should unapologetically monitor their teen’s media usage, especially in treatment and early recovery, since so much drug use occurs with friends.” Parents should also emphasize that drunk and drugged driving can be deadly. “These are areas where parents have leverage that they are often afraid to use. But phones and cars tend to reinforce bad behavior.”

Resetting household rules is not a one-time event but rather a process, observes Dr. Hammond. “Especially, if the parents are divorced and there are blended families with different perspectives, it can help to have a supportive mental health provider mediate the conversation on rule-setting,” he says. If parents decide to have a conversation about household rules at home, Dr. Hammond advises them to choose a time when they are calm and are not punishing their teen.

It’s common for teens to test the new rules by increasing their bad behavior right after the parent resets household rules. “If parents are firm in setting and enforcing consequences, that behavior tends to diminish dramatically and pretty quickly,” Dr. Hammond says. It’s also important to address barriers that may interfere with a parent’s ability to consistently enforce the rules. “It takes a lot of energy, effort and time, and it can be inconvenient for them, so many parents may not stick with them and fall back to old patterns.”

Dr. Hammond explains that many teens with a substance use disorder also have a co-occurring psychiatric disorder such as depression or attention deficit/hyperactivity disorder. This means it may take time for the new rules to sink in. He suggests parents post the rules on the refrigerator. “When you go to enforce the rules, if the teen tests them, you can point to them and say, ‘We discussed this, and this is why I’m enforcing them.’”

Parents can also support their teen in recovery practically by helping with scheduling, transportation and moral support. Parents should seek to understand where their teen is coming from and acknowledge his or her experiences, thoughts and feelings as valid. Additionally “parents should make a point to let their teen know that they know that stopping their drug use difficult,” Dr. Hammond says. It’s important to empathize with what the teen is going through, along with talking about the negative side effects of drug or alcohol use.

He urges parents to take time to build the relationship with their teen, and have fun with them. “Parenting shouldn’t just be about discipline and punishment,” he states. “There should be time for family activities.”

Above all, parents shouldn’t blame themselves or their teen for substance use. “Don’t beat yourself up for not being a perfect parent,” Dr. Hammond says. “This is really hard, and parents should be applauded for trying. Blame doesn’t help people to rebuild their relationships and to grow.”