Naloxone Offered Free to High Schools Around the Country 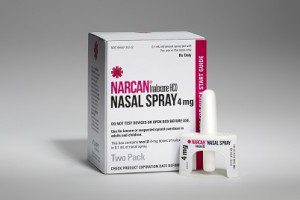 The opioid overdose antidote naloxone is being offered free to high schools around the country by the drugmaker Adapt Pharma, according to U.S. News & World Report.

Naloxone, sold under the brand name Narcan, quickly reverses overdoses from heroin and prescription painkillers. Naloxone will be offered in nasal spray form to high schools through state departments of education. The Clinton Foundation’s Health Matters Initiative is collaborating on the project.

Many states do not have rules that would permit high school staff to administer naloxone in an emergency without facing liability from parents or guardians, the article notes. There are significant variations in state and local rules about whether staff is allowed to administer medication to students. In some school districts, medication can only be administered by school nurses, who often work at more than one school.

The National Association of School Nurses (NASN) in June said that “incorporating use of naloxone into school emergency preparedness and response plans is a school nurse role.” In a statement, the group said “the safe and effective management of opioid pain reliever-related overdose in schools [should] be incorporated into the school emergency preparedness and response plan.”

Last year, New York joined at least four other states in allowing public school nurses to add naloxone to their inventory. Other states with similar policies include Vermont, Massachusetts and Delaware.

Adapt Pharma is also providing a grant to NASN to support their education efforts concerning opioid overdose education materials. In a news release from the company, NASN President Beth Mattey said school nurses act as first responders in schools. “We educate our students, families, and school staff about prescription drug and substance abuse, and help families seek appropriate treatment and recovery options,” she said. “Having access to naloxone can save lives and is often the first step toward recovery. We are taking a proactive approach to address the possibility of a drug overdose in school.”