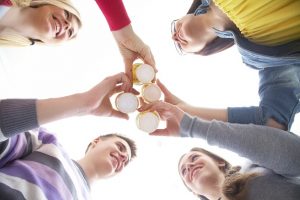 A new review of studies from around the world finds young people who have greater exposure to alcohol marketing appear to be more likely subsequently to initiate alcohol use and engage in binge and hazardous drinking.

The researchers reviewed 12 studies involving a total of more than 35,000 participants from Europe, Asia and North America. All 12 found evidence of a positive association between level of marketing exposure and level of youth alcohol consumption. “The last time there was a review of the literature on alcohol marketing and youth was in 2008,” said lead researcher David Jernigan, Ph.D., Director of the Center on Alcohol Marketing and Youth (CAMY) at the Johns Hopkins Bloomberg School of Public Health.  “There have been many new studies since 2008, and what this review does is allow us to document that similar findings are being replicated over and over again in multiple countries and across multiple cohorts.”

Since 2008, there have been numerous innovations in reaching and engaging potential consumers—particularly children and teens—through digital media. “Exposure to alcohol marketing through digital media is associated with higher rates of drinking,” Dr. Jernigan said.

The review, which appears in a supplement to the journal Addiction, is one of 14 studies on youth and alcohol marketing that appeared in the journal’s January 10 issue. In the studies, public health experts warn that youth around the world are exposed to extensive alcohol marketing, and that current controls on marketing appear ineffective in blocking the association between youth exposure and subsequent drinking. The experts called for governments to strengthen rules governing alcohol marketing with more effective independent statutory regulations.

Alcohol is the number one drug consumed by teens and youth and is linked to approximately 4,300 deaths per year. Alcohol advertising in the U.S. is primarily regulated by the alcohol industry itself through a set of voluntary codes, which includes not placing any ads in media where a disproportionate share of the audience is younger than 21.

The review concludes the finding of several studies that levels of alcohol marketing exposure appear to be as high or nearly as high among younger teens as they are among older teens and young adults “represents a significant failure of current marketing codes to protect minors from marketing messages. This is particularly important with digital marketing techniques that encourage interactive engagement with brand marketing and are difficult for parents to monitor and control.”

“Innovations in digital media are way ahead of where public health is able to measure and assess impact,” Dr. Jernigan said. “And they are way ahead of where government can take steps to protect kids. Changes are happening so quickly that resources don’t exist to monitor this from a public health perspective. Self-regulatory codes in the alcohol industry in this country aren’t working, and the government regulators aren’t doing much about it.”

Alcohol ads that impact children and teens aren’t limited to digital media, he noted. Young people are exposed to many alcohol ads through billboards. He notes that while the federal government has been lagging in its efforts to protect youth against alcohol marketing, many local communities have taken up the slack by banning alcohol billboards and have either banned or restricted alcohol retail signage.