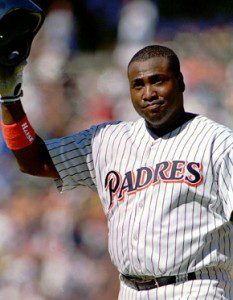 After a four year battle with salivary gland cancer, San Diego Padres player Tony Gwynn passed on Monday, June 16th. Gwynn’s unfortunate tale involved smokeless tobacco, the chewing of which is still associated with baseball. Despite recent efforts from Major League Baseball (MLB) to discourage the use of this product, coaches and players have battled with addiction to smokeless tobacco for many years.

Nicknamed “Mr. Padre”, Gwynn was a force to be reckoned with on the diamond. He is considered to be one of the best and most consistent hitters in baseball history. He was diagnosed with mouth cancer in 2010, and surgery to remove lymph nodes and tumors from the gland left his face partially paralyzed on the right side. Gwynn was extremely vocal of the link between his chewing tobacco and his cancer. He was quoted as saying, “Of course it caused it … I always dipped on my right side.” Ultimately, at the young age of 54, just like 480,000 other Americans each year, Tony Gwynn lost the battle to his tobacco-related disease.

Gwynn’s death has reinvigorated the debate of banning tobacco in Major League Baseball. In 2011, Major League Baseball modified club rules in order to prohibit teams from providing tobacco products to players and strongly discourage clubhouse attendants from purchasing tobacco for players. Players cannot have tobacco tins in their uniform pockets or do televised interviews while using smokeless tobacco. Violators are subject to fines.

The new rules, enacted as part of the latest collective bargaining agreement with the Major League Baseball Players Association, aim to look out for the health of players, in addition to helping players be a better example to youth fans. The dangers of smokeless tobacco are evident. Starting in 2012, teams were required to screen players for signs of oral cancer. A total of 28 carcinogens, or cancer-causing agents, have been identified in smokeless tobacco and smokeless tobacco is associated with a high risk of oral cancer, particularly located in the gums or cheek, areas which typically come into direct contact with the tobacco. But the players were not willing to agree to ban tobacco use entirely.

Other players like Dustin Pedroia and Clay Buchholz of the Red Sox have also come forward to publicly comment on their own addiction to chewing tobacco. The most recent is Ian Desmond, from the Washington Nationals – he and others have also spoken about the challenge of quitting, including Steven Strasburg and Bruce Bochy, manager of the World Champion San Francisco Giants. Unfortunately, tobacco is ingrained into the baseball culture. In fact, a survey conducted in 1999 shows almost a third of rookies starting in the major leagues were already users of chewing tobacco.

While the use of smokeless tobacco endangers the health of Major League ballplayers, it also sets a terrible example for the millions of young people who watch baseball at the ballparks and on TV. A survey done by the Centers for Disease Control and Prevention in 2012 found that 11.2 percent of high school boys were using smokeless tobacco, a 6.7 percent increase from 2002. Many kids look up to baseball players as heroes and role models and it’s not uncommon for young fans, including the players’ own children, to want to emulate and follow the lead of their favorite players.

As of late, stadiums for many sports have enacted stricter tobacco policies for patrons as it relates to tobacco use, baseball included. Additionally, other leagues have led the charge on instituting tobacco bans including the National Collegiate Athletic Association and the National Hockey League. Even the Olympics are now tobacco-free. In 1993, tobacco use was banned in baseball’s minor leagues, but yet still allowed in the MLB.

With his impressive career and respected legacy, Gwynn will always be remembered and loved by family, friends, and fans alike. He will be remembered for his incredible swing and untouchable statistics, but we will remember him for his stand against tobacco in baseball and we will strive to ensure that is part of his legacy. We’ve lost far too many people, far too early – so we cannot give up the fight.