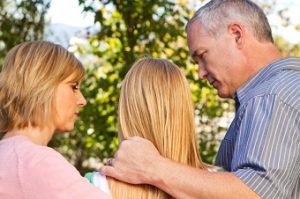 We lose nearly 130 people a day to drug overdoses. It is the leading cause of accidental death in the United States, and the loss is felt most acutely by the families left behind. By doing a better job of helping families and their addicted children, we can most effectively reduce these deaths and the accompanying pain and suffering.

Nothing tears apart the fabric of a family quite like having a child who’s struggling with drugs or alcohol. In my experience, parents of these kids are usually overwhelmed by feelings of guilt, shame and fear. Will their child be alive the next morning? When they most need a comprehensive evaluation of their child’s condition and evidence-based treatment options as “standards of care” to consider, they instead find conventional wisdom from well-meaning friends and recommendations from under-trained healthcare professionals. In an age when most people use the Internet to access health information for their family, there is very little reliable science-based information available online, a far cry from the abundant resources for all other adolescent and young adult health issues and disorders.

I am haunted by a mother’s story about her two daughters. Her elder daughter developed juvenile diabetes. She was very sick, in and out of the hospital for many months. After a correct diagnosis and beginning insulin therapy, her health began to improve. Still, she struggled with her condition and required lifestyle changes that made her feel different from her friends. The parent’s doctor suggested programs of support and training for the family, and after a period of adjustment the daughter and family began to thrive again.

A few years later, the mother’s younger daughter developed an addiction to opiate pain medications, after suffering a serious sports injury. Always quiet and shy, this daughter became sullen and withdrawn. She started acting out, embarrassing her family. The question everyone silently asked, “Why won’t she just stop?” Friends and loved ones all insisted that she wouldn’t stop until “she hit bottom,” and even their doctor didn’t think her addiction was a medical problem. Anything loving and positive the mother did toward this daughter was seen as “enabling” and as making her daughter worse. Feeling like she was out of options and following the advice of her closest friends, the mother finally told her daughter she had to leave home. Less than two weeks later, the daughter was found by police in an abandoned car – she had died from an overdose of heroin.

The mother’s regret and message to anyone who would listen was “Why didn’t I care for my younger daughter and fight for her healing with the same determination and love as my other daughter? Why wasn’t I told that there are other, better options and even new medications to consider?” Why indeed.

My perspective surrounding addiction has been heavily influenced by the parents and families I’ve met along the course of my 30 years with the Partnership for Drug-Free Kids. These parents have humbled me, educated me and inspired me and the organization to do more for the children and families in the crosshairs of the most under-recognized public health crisis of our time. The most prevalent drugs causing death and suffering may have changed since the Partnership was founded – from crack cocaine in the 1980’s to abuse of pain medication and other opiates like heroin today – but greater access to evidenced-based treatment, along with support and education for families is needed just as urgently now.

We believe that there is a path to recovery for everyone, but no single path for everybody. We believe that addiction is a health issue. Like other adolescent and young adult health issues, there is increasing evidence that parents with kids who are struggling with drugs or alcohol who are given guidance, support and training have better outcomes with their kids than parents who don’t. Scientific and medical research is showing that some approaches work better than others. But parents must know that there are options, and that conventional wisdom about people needing to “hit rock bottom” often ends up not helping, or making things worse. The recently passed Comprehensive Addiction and Recovery Act is the most important piece of legislation for families in recent memory. The state-based Good Samaritan laws and wider availability of Naloxone, a rescue medication that helps reverse the effects of opioid overdose, are helping to reduce overdose deaths. Millions of people who are in recovery and millions of families who are healing are beginning to speak out for change, fighting the stigma of addiction and demanding better care for their children.

These are real and encouraging steps in reducing addiction. But the millions of families facing these frightening challenges deserve more. So much of the suffering is preventable, so many lives could be saved and so many parents should have better information and support to help their children thrive. We must do a better job leveraging the most powerful force in healing – a parent’s love and drive to help and protect their children.

Tom Hedrick is one of the founding members of the Partnership for Drug-Free Kids, a national nonprofit committed to helping families struggling with their son or daughter’s substance use. He helped lead the development of a national Parent Support Network, including online resources at drugfree.org, a Toll-Free Helpline and peer-to-peer coaching.
By Tom Hedrick