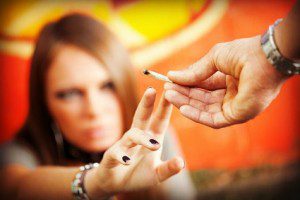 A new study finds marijuana use in the first year of college can lead to students missing classes. The more frequently a student uses marijuana, the more they tend to skip class, earn lower grades, and graduate later.

Researchers at the University of Maryland School of Public Health followed 1,117 college students for eight years to test the direct and indirect effects on marijuana use on GPA and time to graduation. The findings are part of a larger study, called the College Life Study, which began in 2003.

“Alcohol and other drug use are also related to skipping class, but when we adjusted for other substance use we still found a relationship between marijuana and skipping class,” said lead researcher Amelia Arria, Associate Professor of Behavioral and Community Health at the University of Maryland School of Public Health.

She noted previous studies have found a relationship between marijuana and other drug use and academic declines in high school. “The question of whether marijuana use is linked to skipping classes hasn’t been investigated as thoroughly,” she noted.

The findings are published in the Psychology of Addictive Behaviors.

Dr. Arria said the relationship between marijuana use and academic problems might be explained by decreases in a student’s motivation to pursue academic goals, or problems absorbing material that is presented during class. She added, “They may not be as motivated to focus and excel in their classes because they are more focused on short-term rewards of drug use, rather than the long-term rewards of getting good grades, and all the work that involves. They may not be taking advantage of all that college has to offer.”

Parents often think that once they send their teens to college, the hard work is done, Dr. Arria said. “They tend to breathe a sigh of relief when they send their kids off to college, but the hard work is just beginning in a certain sense,” she said. “Mental health problems and substance use can peak between 18 and 25, so parents still need to be vigilant during those years, and notice when things are different with their teen, and getting worse.”

Dr. Arria recommends that parents visit www.collegeparentsmatter.org, a website designed to help parents have difficult discussions about substance use with their college-age children. Topics include impaired driving, living off campus, housing and roommates, celebrating their 21st birthday safely, spring break, holidays and Halloween. The website was created by The Maryland Collaborative to Reduce College Drinking and Related Problems.

“Parents invest a lot to send their kids to college. While college is a time to develop social relationships, they should talk to their teens about making the educational aspects of college a priority, and how using substances can impair their academic success.”

Given the connection between marijuana use and academic problems, Dr. Arria and her colleagues are urging college administrators to integrate substance use screening within academic assistance centers. “When a student is struggling academically, they are typically given tools to help them with study skills and time management. But screening for drug and alcohol problems is usually not a part of an initial assessment to understand the barriers to academic success. Students could then be referred to the health or counseling center to address a substance use problem.”