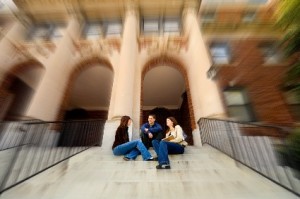 Many college students participating in Collegiate Recovery Programs (CRPs) for drug and alcohol addictions also report being in recovery from or currently engaging in multiple behavioral addictions, a new survey finds. These addictions include eating disorders, and sex and love addiction.

The findings come from the first federally funded nationwide survey of college students in addiction recovery, led by Alexandre B. Laudet, PhD, Director of the Center for the Study of Addictions and Recovery at the National Development and Research Institutes in New York. The 486 students in the study were participating in CRPs. They reported past use of numerous substances, and most had a severe addiction history in spite of their young age.

The survey found 71.6 percent said they were in recovery from alcoholism, and 72.6 percent, from a drug addiction. Many also reported being in recovery from behavioral addictions including eating disorders (15.6 percent), sex/love addiction (9.5 percent), self harm/injury (10.5 percent) and compulsive shopping (3.1 percent). At least 12 percent said they were currently engaging in at least one type of behavioral addiction.

The findings will be published in the Journal of Substance Abuse Treatment.

“Addiction treatment needs to address the whole person,” Dr. Laudet said. “If you quit drinking but start compulsive eating, shopping or sex, you are still not functioning at a healthy level. Clinicians and researchers tend to look at drugs and alcohol separately, but if a person in recovery solves one problem and ignores the others, they do so at their own risk. We need to start asking questions about behavioral addictions, and designing programs that help people deal with different addictions in an integrated way.”

Much is still not known about how different addictions interact and how behavioral addictions affect recovery from drug and alcohol addiction, Dr. Laudet notes.

A few CRPs began about 30 years ago, providing sober dorms and recovery support meetings on campus. As substance use on college campuses became increasingly recognized as a public health issue, experts and federal agencies including the U.S. Department of Education have called for campus-based services for recovering students.

CRPs are a recovery-support model designed to create a campus-based “recovery-friendly” space and supportive social community to enhance educational opportunities while supporting continued students’ recovery and emotional growth. The number of CRPs nationwide has grown 10-fold in the past 15 years, from four in 2000 to an estimated 40 today, with others in development.

Part of the impetus to study CRPs has been to gather information on the students in these programs, so they can be compared with young adults of the same age and characteristics who are in recovery but are not in such programs, Dr. Laudet explains. She and Dr. Kitty Harris of Texas Tech University, which has one of the oldest CRPs, received a grant from the National Institute on Drug Abuse to start documenting the programs and the students who participate in them.

In an earlier study, they found annual relapse rates among students in CRPs average 8 percent. The academic achievements of students in the programs, measured by their GPA and graduation rates, surpass the colleges’ overall outcomes.

“These programs are so important to students, who are trying to deal with the stress of college, and fitting in on campus, where it seems as if everyone is partying. They want to have friends, but a lot of college life seems to revolve around misbehaving. If you’re in recovery, it feels like you have to choose—do I want to fit in or stay in recovery?,” Dr. Laudet says. “These programs are built on peer support, and creating a safe place. We need many more such programs on college campuses around the country.”