Most Teens Don't Drink or Use Drugs. How to Help Your Kids Avoid it Too.

These numbers are encouraging, and as a parent, you’re in the best position to keep your child healthy. The majority of teens say their parents are the most important influence on their decisions about whether or not to drink or use drugs.

Any teen use is a concern

Over the past two decades research has helped us understand the unique risks of substance use during the teen years, a time when major changes are taking place in the the brain. Introducing any addictive substance during this sensitive time can have both short- and long-term effects. It can interfere with healthy development — especially in the parts of the brain that control memory, learning, judgment and emotions. And it significantly increases the risk of lifetime addiction.

Even if your teen only uses once or once in a while, it can still cause damage and lead to negative consequences, including addiction. Symptoms of nicotine dependence often develop soon after first use. In the case of prescription pain relievers, even prescribed use during adolescence is associated with a higher risk of opioid addiction in early adulthood.

What works for prevention

A child’s sex, race, economic background or most other demographic characteristics can’t predict whether or not they’ll use substances. Everyone is different and some teens are at a higher or lower risk for substance use than others. But no child is immune, no matter their grades or how involved, or who they’re friends with.

There are many reasons why young people use or try substances. In some cases, it can be as simple as being offered a drink or vape. To encourage healthy decision making, we recommend parents focus on fostering their child’s:

Schools can’t be the only source of information about substance use. Substance use prevention that involves the family has been found to be the most effective. Not all schools have adequate prevention programming, and no school is able to tailor its programming to the needs of each individual child.

Even if schools do have prevention strategies, parents play an even more important role in helping children navigate the world and make healthy decisions. You are uniquely positioned to identify early signs of trouble in your child’s life, many of which might not be noticeable to even the most-dedicated school professional. Regular and honest communication with your child is key. 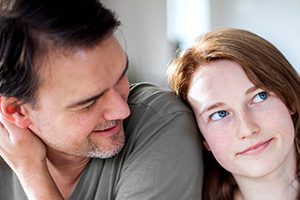 Connecting and talking with your teen

Get tips on maintaining a strong bond with your child during the teen years, when your involvement can play a big role in preventing nicotine, alcohol and drug use.

Modeling healthy behavior — which may include drinking responsibly — is a good thing. But allowing teens to use substances in a ‘safe’ or supervised manner sends the wrong message and doesn’t protect against future problems.

Alcohol use simply isn’t safe for young people. And evidence shows that starting use at a young age increases the chance of later addiction to one or more substances.

There is a common misconception that the cultural norms around alcohol in Europe – which is more permissive of teen drinking – lead to better outcomes. The rates of alcohol problems among youth and adults are actually higher in Europe. According to international data from the World Health Organization (ESPAD)[4], European teens consistently report higher levels of drinking, binge drinking and alcohol-related problems compared to youth in the United States.

An extra word of caution

Today’s substances are more harmful than those you may have been exposed to as a teen. Most substances today are more potent and addictive than in the past, and many are marketed in ways that directly appeal to kids.

There’s a reason teens behave the way they do. Understand how your teen’s brain is developing and why this is so important to preventing drug use.

What Teens Have to Say About Nicotine, Alcohol & Other Drugs

We asked teens about their friends who engage in substance use and an intention to try substances in the future. Here's what they said.