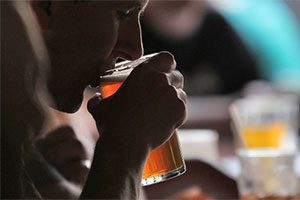 A growing body of research points to the relationship between alcohol and suicide. Taking steps to reduce the availability of alcohol may help to reduce the number of suicides, says Raul Caetano, MD, PhD, Senior Research Scientist at the Prevention Research Center of the Pacific Institute for Research and Evaluation in Oakland, California.

Dr. Caetano was a co-author of a study published in the journal Addiction in 2015 that found in the United States, the density of both on- and off-premises alcohol outlets in a county is associated positively with alcohol-related suicide.

“It’s pretty clear from that study that there is a relationship between alcohol outlets, such as bars, restaurants and liquor stores, and suicide,” he said. “That suggests that public health policies that affect the availability of alcohol in the community can also help prevent suicide. It’s an opportunity for prevention that hasn’t been fully utilized.”

He added, “The more alcohol outlets, the more hours they’re open and the more promotions they offer – such as happy hour or ladies night – the more alcohol problems there are in the community. These factors all increase the availability of alcohol.”

It is well known that increasing taxes on alcohol sales decreases alcohol consumption, Dr. Caetano noted. “We assume increasing alcohol taxes also would decrease suicide rates,” he said. “The government taxes alcohol because of revenues, not because it wants to improve public health, but it does have that benefit.”

Economic factors also play a role in alcohol-related suicide. In a study published in 2015 in Injury Prevention, Dr. Caetano and colleagues looked at suicide data before, during and after the U.S. recession of 2008-2011. They found the fraction of alcohol-related suicides increased 7 percent after the onset of the recession, from 22.2 percent in 2005-2007 to 23.9 percent in 2008-2011. “These findings suggest that acute alcohol intoxication in suicide interacts with economic conditions, becoming more prevalent during contractions,” the researchers wrote. Alcohol-related suicides during the recession were more common among males.

“It seems that men may be more connected psychologically to employment, so they may react more strongly than women if they lose their job during the recession,” Dr. Caetano said. “During and after the recession I saw a lot of talk in the media about the difficulties families faced when they couldn’t pay their mortgage, or their house was repossessed, but the psychological consequences weren’t given a lot of attention.”

Another study Dr. Caetano co-authored in 2015 found gender differences in alcohol-related suicide. The study, published in Alcoholism: Clinical and Experimental Research, also found differences among ethnic groups. Among men, precipitating circumstances for suicide associated with a high blood alcohol level were physical health and job problems for Blacks, and experiencing a crisis, physical health problems and intimate partner problems for Hispanics. Among women, the researchers found only one precipitating circumstance associated with a high blood alcohol level: substance abuse problems other than alcohol in African-American women. The study concluded that across all ethnic groups, the major risk factor for acute alcohol intoxication prior to suicide is the existence of a prior alcohol problem. “While this is not an unexpected finding, it emphasizes the importance of suicide risk assessment for clients in treatment for alcohol problems,” the researchers wrote.

A study in the same journal published in 2013 found alcohol use and legal intoxication before committing suicide are common among U.S. ethnic groups, especially among men. The link between alcohol and suicide was highest among American Indians/Alaska Natives, and was particularly acute among young men. “The problem of alcohol and suicide among young Native Americans is very dramatic and tragic,” Dr. Caetano said. “These suicides are occurring during a time of life when people are usually the most hopeful. About 50 percent of the alcohol-related suicides among American Indians and Alaskan Natives occur among those younger than 30 years of age. It’s a very powerful indicator of the many problems that American Indians and Alaskan Natives face in terms of their health and the community in general. Their deaths affect not only their families, but their whole community.”