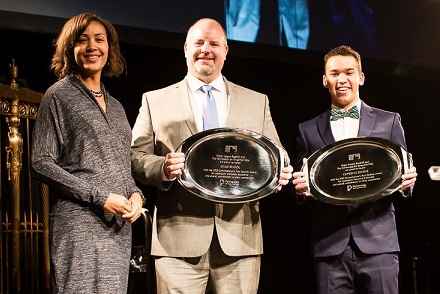 NEW YORK (December 15, 2015) – Chad Smock, a youth coach from Hilliard, Ohio and Cameron Justice, a teen athlete from Dublin, Ohio, were honored by the Partnership for Drug-Free Kids and Major League Baseball Charities (MLB), with the sixth annual Commissioner’s Play Healthy Awards. The award recipients were recognized and presented their awards by Melanie LeGrande, Director of Community Affairs for Major League Baseball, during the Partnership’s annual gala at Gotham Hall on December 8 in New York City.

Judged by a panel of parents, coaches and sports industry professionals, Coach Smock and Justice were selected from a competition across the United States, Canada and Puerto Rico for their dedication to fair, drug-free play and an overall healthy lifestyle. Winners were chosen based on their commitment to leadership, sportsmanship and encouragement of others, on and off the playing field.

Coach Chad Smock is a girls’ varsity lacrosse coach at Hilliard Davidson High School in Ohio; a school sports and senior portrait photographer; a father; and an advocate for guiding youth to live a healthy and drug-free lifestyle. Since 1986, Coach Smock has been involved in Youth to Youth International, a community-based drug prevention and youth leadership program that encourages young people to live free of drugs and alcohol. Despite the loss of his daughter earlier this year, his passion and dedication to motivating teens never faltered as he continues to inspire his student-athletes to do their best in sport and in life.

“Chad Smock is my role model. I strive to instill happiness, confidence, and optimism in others, the way he, and his late daughter have always done for me,” shared Christine Kausel, a former player on his lacrosse team. “I am beyond thankful for the dedication Coach Smock has put into the Hilliard Davidson High School Girls Lacrosse program, but I am even more thankful for him helping me grow into the person I am today. He continues to inspire me.”

Teen-athlete Cameron Justice plays baseball for the Dublin Coffman High School team in Ohio and is a very active member of his community. When he’s not engaging his teammates to reach their full potential, he can be found volunteering with Teen Institute or Dublin A.C.T. Youth Council, and is co-leader for the Youth to Youth International program (and has actually crossed paths with Coach Smock). As a member of his local Teen Institute, a drug prevention effort, Cameron mentors’ kids on leadership and refusal skills, goal setting, the importance of self-worth, and how to have fun free of substances. His participation in Dublin A.C.T. Youth Council offers him the opportunity to lead youth-driven community projects to address underage drinking and drug abuse. He has created empowerment workshops both at the middle-school and high-school levels called “Learn to Lead.” Last October, he participated in a local event, “Say Boo to Drugs,” distributing candy to over 5,000 elementary students while providing drug prevention materials to parents.

“One of the many things I admire about Cameron is that he has found a way to balance his rigorous academic and athletic schedule and still manage to invest his time and passion to be an active member with Teen Institute, Dublin A.C.T., and Youth to Youth,” said Dr. GeorgiAnn Diniaco, Dublin City School’s Safe and Drug Free Schools Coordinator. “He uses his strengths as opportunities to build positive relationships and to help lead others on a path of making healthy, lifelong choices.”

“Major League Baseball is thrilled to help recognize Coach Chad Smock and Cameron Justice, who are both inspirations to their teams, communities and peers,” said Tom Brasuell, Vice President of Community Affairs for Major League Baseball. “Our commitment to youth is one of our core priorities, and we are proud to be a part of this effort to send the message of clean living, fair competition and helping others to youth and coaches.”

“It is a great honor to be able to recognize these hometown heroes for their efforts that go beyond the playing field. Coach Smock and Cameron’s actions to empower youth to be above the influence of drugs and alcohol have made a notable impact in their shared community,” explained Marcia Lee Taylor, President and CEO of the Partnership for Drug-Free Kids. “MLB continues to be a remarkable and steadfast partner in our work on behalf of teens and families. We are excited to celebrate and award these two individuals with the 2015 Commissioner’s Play Healthy Award for the impact they are making advocating for healthy competition and life.”

The two winners received a trip to New York City for themselves and one special guest, two tickets each to the Partnership for Drug-Free Kids’ annual gala, a $500 gift card to a sporting goods store and a commemorative plaque. Both winners will be featured prominently on drugfree.org, and abovetheinfluence.com, the Partnership’s popular and effective drug and alcohol prevention initiative created for American youth.

The Commissioner’s Play Healthy Awards are a culmination of comprehensive nationwide efforts by MLB and the Partnership for Drug-Free Kids, including the Play Healthy website, to educate families on the risks of steroids and performance-enhancing substances and to recognize youth coaches and student athletes who embody the spirit of teamwork and healthy, drug-free competition. Major League Baseball has supported the Partnership’s message over the last several years with more than $42 million in media exposure and grassroots initiatives to build awareness for the perils of performance enhancing drug and steroid use. Join the conversation about our Play Healthy efforts, by following #playhealthy on social media.