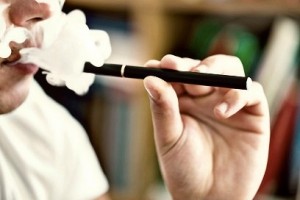 The other top reason is the flavoring in nicotine liquid. The wide range of flavors include cappuccino, pomegranate and single-malt scotch.

The findings about vapor tricks come from a study by researchers at Yale School of Medicine. The Yale team asked 5,400 Connecticut teens to explain what they found “cool about e-cigarettes.”

“We expected the flavors were attractive,” said researcher Suchitra Krishnan-Sarin. “But smoke tricks were a surprise to us.”

E-cigarettes can be adjusted to operate at high temperatures to produce more vapor. Teens are increasingly becoming interested in “cloud competitions,” in which adults compete to perform the best vaping tricks. These events are becoming a regular feature at local vape shops. Some regional competitions offer thousands of dollars in prize money, according to Reuters. Although minors are barred from competing in the events, some vape shops allow them to be part of the audience.

Teens are also learning about the tricks through videos posted on YouTube and Instagram. “Even if (teenagers) don’t attend these events they are exposed to a lot of these issues,” Krishnan-Sarin said.