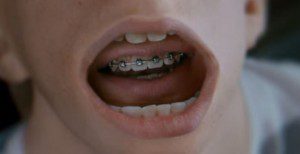 ~”Mouth” spot encourages teens to speak for themselves~

The Partnership for Drug-Free Kids premiered today a new teen-targeted television spot as part of its Above the Influence (ATI) campaign. The TV spot is the second produced by the Partnership since taking the lead on ATI.

The new public service announcement, entitled “Mouth,” was created pro bono by New York-based advertising agency Atmosphere Proximity. In the TV spot, a teen boy converses with his friends. The boy’s mouth opens to reveal mouths of other teens that speak for him in voices other than his own, responding to parts of the conversation for him with negative comments. The spot concludes with a voiceover stating, “Speak for yourself. Live Above The Influence.”

The ad, available in both 15- and 30-second versions, is accompanied by corresponding digital banners, an interactive Facebook application game called “Mute the Mouth” and a set of humorous GIFs that teens can share to respond to various influences in their lives.

“Today’s teens feel pressure to be true and authentic. The ‘Mouth’ spot serves as a reminder to teens that while they are confronted with different types of influence and pressures every single day, they have the ability to live Above The Influence – to understand those pressures, and be true to themselves,” said Caryn Pace, Chief Communications Officer for the Partnership for Drug-Free Kids. “The creative team at Atmosphere successfully captured this in a way that resonates with teens.”

ATI is a popular and effective drug and alcohol prevention initiative created for American youth. The Partnership is responsible for all national youth outreach, including advertising, social media and campaign websites. ATI’s positive impact has been documented in several studies published in respected peer-reviewed journals including American Journal of Public Health and Prevention Science. With nearly 2 million Facebook likes, the campaign has an active, robust online audience. The ‘Mouth’ television spot reinforces the ideals of the ATI campaign – to underscore a strong sense of self in teens, and help them find the confidence to stand up to the daily pressures in their lives without succumbing to negative influences to help them cope.

“Above the Influence has a legacy of super creative (sometimes unusual) work designed to help teens look at serious issues differently – an awesome torch to run with. So we created a bizarre mouth inside a mouth to grab attention, and demonstrate how awkward it is – for everyone – when you’re not being authentic. Our approach was to keep it weird. I think we pulled it off,” said Keith Ross, Creative Director, Atmosphere Proximity.