When Other Parents Let Their Kids Drink and Smoke Pot 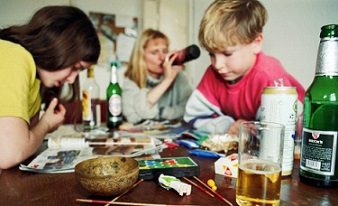 “My dad says it’s okay to smoke marijuana.” That’s what a sixth grader said to me at a drug prevention program where I presented. I can’t tell you how many times parents have told me that they know their kids drink or smoke pot, but they aren’t worried because it’s “beer and pot.”

I’ve seen parents hand their teenager a can of beer, saying that their kid isn’t allowed to drink anywhere but at home. While I try, very briefly and discreetly, to explain why that’s a bad idea (not to mention against the law), it’s been a tough sell.

Now that my own kids are full-blown teenagers, I’ve explained to them why it’s not healthy for them to drink alcohol (even though it’s safe for most adults to drink in moderation) as well as why pot is not acceptable either. I can only hope that if they are ever offered alcohol or marijuana by an adult who tells them it’s okay, that they will turn it down. I try to prevent them from being in that kind of situation by actively doing one of the things that I’ve only read about up until now: Knowing who they hang out with and getting to know their friends’ parents.

Research shows that one of the ways to prevent teens from getting involved with drugs is to monitor where they are and who they are with. It’s easier said than done, but so far, it’s working. My kids complain (loudly) when I insist on talking to the parents of their friends when they are going to their house, or when parents are driving them somewhere. I want to know that those parents aren’t the ones who think drinking and smoking pot is okay.

This takes the fortitude to ignore your kids when they complain that “it is so embarrassing.” They’ll get over it. So far, the parents don’t mind, and some have even called me for the same reason.

Parents who look the other way, don’t pay attention, or provide the alcohol or other drugs, are sending a message to their teens that getting drunk or high is acceptable. Unfortunately, I have met parents who have lost their children to drugs or who are dealing with their kids’ addictions. Some of them have told me that they knew that their kids were drinking and smoking marijuana but they weren’t concerned because “that’s all it was.” They learned the hard way that any time a teenager gets buzzed or high, it’s a problem, whether they are home or not.

Convincing teenagers not to use drugs is tough. I just didn’t expect that convincing their parents that giving kids alcohol/pot is just as hard.

Have you met parents who think its okay for teens to drink alcohol or smoke pot? How did you deal with it? Comment below and share your stories.

Preventing alcohol and drugs isn’t always easy. Here are six research-supported parenting practices to set you on the right path.

Your Child’s Treatment & Recovery Roadmap: A Guide to Navigating the Addiction Treatment System

What kind of addiction treatment is best for your child? What should you look out for? How will you pay for it? Use this guide to help you decide.

There Are “All You Need to Know” Books About Puberty. Why Not About Drugs & Addiction?

It can be tough for parents to have conversations about drugs. But it’s important to provide the facts and have a conversation.

Thanks for your message Deon. We have forwarded your message to one of our helpline specialists who can help better answer your question, and she will be reaching out to you shortly. Our Helpline is a good place to start if you’d like to talk to someone about what you’re going through. Feel free to connect with us in whichever manner you choose in the future: https://drugfree.org/helpline < https://drugfree.org/helpline>
Thank you. -The Partnership for Drug-Free Kids