Dads: Here’s Some Advice on How to Talk to Your Teen 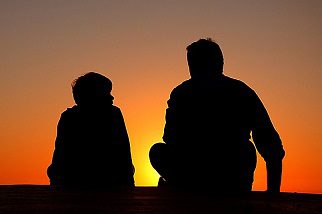 We’ve known for years that involved and connected fathers usually raise teenagers who do better in school, have healthier relationships, and stay out of trouble. Not bad for a job that we all want to do well. But sometimes things get in the way of becoming the father we want to be. Our work demands increase, we’re around the house less, and we try to rush our kids to talk to us. I can remember racing home from the office when my kids were young, only to find that they were engaged in something else or getting ready for bed. By their teen years, I had figured out that I had to catch them when they were available and let go of the notion that they would accommodate my schedule.

It’s mighty difficult to work fifty to sixty hours a week and be there when they need you. It will mean juggling your schedule to show up for their events and be around enough to have the “talks” that are such an essential part of good parenting. But it can be done.

Working late? Text them, e-mail them, or catch them on their cell phone (if you’re lucky they’ll pick up). Let them know that you’re thinking of them even if you’re not around. That means tuning into their lives — knowing about their interests, (sports, music, websites, etc.) their friends, successes and disappointments. Beware of conversations that are exclusively focused on how they are doing in school. It’s a sure fire way to end a conversation quickly. Why not ask them to help you with something? They can teach you how to use a new app, play a video game, or even advise you on the dated clothing you wear! You’d be surprised to learn what a wonderful icebreaker this is.

If you want to talk about the sensitive issues (sex, drugs, etc.) you better learn to speak comfortably with them first. Dads often talk the language of facts and avoid the language of feelings because it makes them uncomfortable. But it doesn’t have to be that way. If you feel bothered by something, think about what it is, and try to express it. For example, say that you’re worried about Grandma’s health and aren’t sure what to do. It sends a powerful message to your son: It’s okay to be afraid sometimes and talk about it. Sometimes, men get choked up and that’s a sure sign that something is brewing. It could be as simple as saying goodbye to your son when he’s going away for a few weeks. Instead of patting him on the shoulder and telling him to take care — squeeze the words out: I love you and I’ll miss you.

Want more help? Ask your wife or son to point out when you’re not being honest about your feelings.

Finally, learn to read between the lines. If your son tells you that he doesn’t care about his stupid girlfriend anymore, but looks upset, pick up on it. Tell him, I know how badly you feel and I can remember going through the same thing when I was around your age. The better you learn to identify your son’s true feelings, the more likely you are to emotionally connect with him. And that’s essential when you’re trying to keep him out of harm’s way. So convey warmth, respect, and genuine curiosity — the dividends will pour in when it’s time to talk about the serious stuff. And guess what? He’ll probably listen to you more often and even come to you for advice when the going gets tough. How can you go wrong?

Learn How to Listen

How to keep lines of communication open by knowing how to listen and when to talk.