“Out Of Reach” Documentary Premiers in Ohio 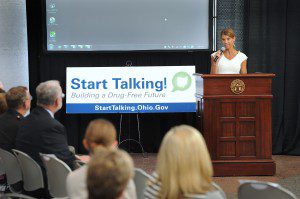 “Out Of Reach” – our special documentary created by a teen filmmaker who captures the issue of teen prescription drug abuse as it exists in his world – premiered in the Midwest on May 27th in Columbus Ohio. The special screening was hosted by Ohio First Lady Karen Kasich. The film originally premiered at the 18th annual Genart Film Festival in New York City in October of last year.

Also present was Steve Cline, Deputy Director of Field Operations for the Partnership. “The ‘Out Of Reach’ documentary is a powerful tool that raises parental awareness of the problem of medicine abuse and helps facilitate conversation around the issue,” he said of the film and event. “The film is a natural complement to Ohio’s statewide ‘Start Talking’ initiative, which encourages parents to have conversations with their kids on prescription drug abuse.”

We are grateful to the Ohio Governor John Kasich, First Lady Karen Kasich and our alliance partner, Ohio Department of Mental Health and Addiction Services (OhioMHAS), for their coordination and support of the Partnership’s effort to curb teen medicine abuse.

August 31 is International Overdose Awareness Day, so let’s do our part to prevent more loss and suffering.

Our President and CEO, Marcia Lee Taylor, participated in the session, HIDTA Heroin Response Strategy: Take-Home Strategies for Your Community, which highlighted several High Intensity Drug Trafficking Areas collaboration with the Partnership and the Centers for Disease Control and Prevention.