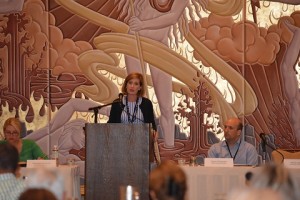 Partnership for Drug-Free Kids President and CEO, Marcia Lee Taylor, was featured on a panel at the Conference of Western Attorneys General this week.

The panel, “Abuse Deterrent Technologies: Fighting Prescription Drug Abuse” was moderated by Florida Attorney General Pam Bondi and also featured former FDA-official Jeanne Ireland and Wayne Winegarden of the Pacific Research Institute. There were about 20 Attorneys General from across the United States in attendance and it was an important opportunity to update them on the work of the Partnership’s Medicine Abuse Project, a national action campaign that aims to prevent half a million teens from abusing medicine.

Response from Creighton Drury, CEO of Center on Addiction, on Oklahoma Settlement Ruling

Please read the statement from Our CEO, Creighton Drury, in response to the opioids settlement ruling in Oklahoma

Thank you for your excellent work in protecting our children from the ravages of drug addiction. I would also like to add that you should teach your children not to steal drugs from others, or you’ll have to answer to your parent, because that can cause the disease that will make you steal drugs from others, and then you’ll have to answer to your attorney general.