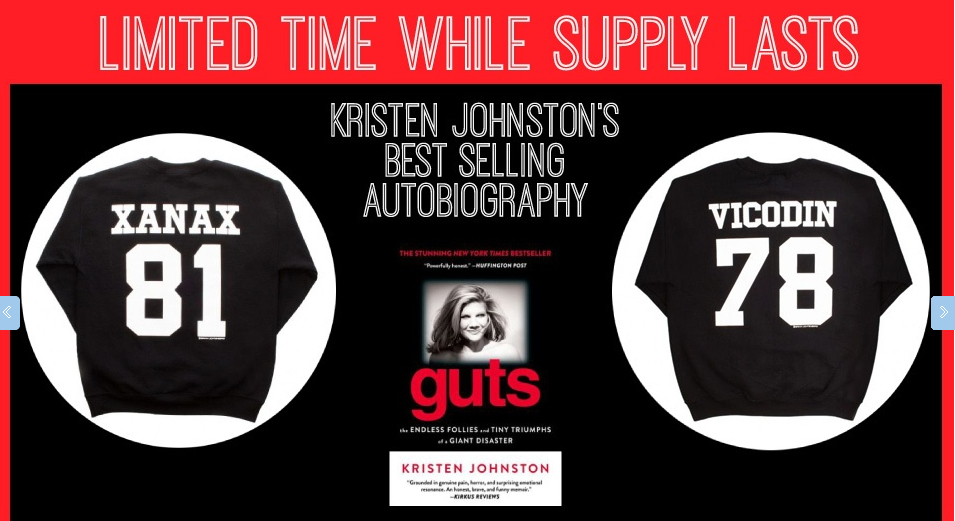 Despite thousands of calls and messages from families who have lost loved ones to prescription drug abuse, the Los Angeles-based boutique, Kitson, has refused to remove apparel that glamorizes prescription drug abuse. Jerseys with “Xanax,” “Adderall” and “Vicodin” in traditional sports team lettering continue to sell for close to $100 each on Kitson’s website and in its stores.

The store, with a clientele that includes celebrities like Paris Hilton and Lindsay Lohan, is now offering the actress Kristen Johnston’s autobiography, Guts, as a “free book with purchase of a jersey.” Johnston, who has struggled with and overcome addiction, brought attention to the company’s irresponsible selling of the sweatshirts this August and, along with the Partnership for Drug-Free Kids, has publicly pleaded for them to pull the shirts from their stores.

Instead, Kitson has chosen to mock recovery and bully Ms. Johnston and her brave work to help break the stigma and misunderstanding that surround addiction. Response to Kitson’s latest questionable promotion has been called “tasteless,” “immature” and “offensive.” What are your views on Kitson’s actions?

We encourage you to:

• Boycott Kitson and please do not support their irresponsible behavior by purchasing their products.
• Share your views on Kitson’s Facebook page.
• Send Kitson a tweet at @KitsonLA and express your concerns.

Center on Addiction Submits Comments to USPSTF Regarding Preventative Services

We submitted recommendations to the U.S. Preventive Services Task Force regarding preventive services

We need our elected officials to help change the addiction system, secure necessary resources and advance effective substance use treatment.

Families Gather in Washington, D.C. to Advocate for CARA 2.0

CARA 2.0 authorizes $1B in funding for the opioid crisis, but makes no mention of family support services. Tell your senators today that this is vital.

Kitson and others like them are greedy, profit motivated and diabolical in their efforts to make money at all costs. The idea that they would use Lohan as a credible source in advertising is laughable at the least..There are many people in active recovery today in this country, and I am one of them. Picketing their stores and word of mouth are the most effective means of hurting them. I intend to start broadcasting this on my radio program starting tomorrow.

Thanks for your organization and all you do.