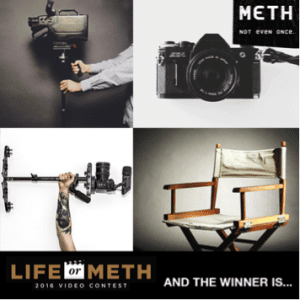 NEW YORK – September 26, 2016 –  The Partnership for Drug-Free Kids, along with The Meth Project, today announced the winners of the “Life or Meth” Commercial Contest. Hudson Bloom and Landon Shimpa created the winning commercial and took home the grand prize of $20,000 for their TV spot, highlighting the negative impact of methamphetamine use in local communities in America. Their winning commercial is entitled “Siblings” and was chosen by a celebrity panel of judges from among 120 submissions from across the country.

As the grand prize winners, Bloom and Shimpa, who are both from Fort Collins, Colorado, will receive widespread exposure for their original TV spot, which will launch nationally as part of national Meth Awareness Week (September 26 – October 2). The commercial is aimed at reaching youth and will air on the Internet and in various social channels, in an effort to educate teens about the dangers of meth use – the primary mission of The Meth Project.

“We created our video because we felt driven by the opportunity to create awareness around this devastating substance,” said Hudson Bloom. We made a fact-driven, emotional commercial that truly relays how destructive using meth is and we believe this will catch the attention of young viewers.”

The celebrity panel that selected the winners consisted of Academy-Award winning cinematographer Wally Pfister, who directed past Meth Project commercials, Randi Kleiner and Kaily Smith Westbrook, the founders of SeriesFest, and Gavon Laessig, Deputy News Director and Front Page Editor at Buzzfeed. The panel of judges selected the “Siblings” ad based on its creative content reflecting the stark realities of the effects of meth use and its impact on the people around the user.

The “Siblings” commercial can be viewed on The Meth Project’s YouTube channel (https://www.youtube.com/user/MethProject/) and its winning directors can be followed on Twitter at @hudbloom and @LShimpa.

The commercial is the centerpiece of Meth Awareness Week supported nationally by The Meth Project. The week kicks off today with the debut of “Siblings” and other meth-related messaging aimed at teens. This year’s theme, “Not Even Once,” draws from the history of The Meth Project and is intended to drive home the message that you cannot do meth, “Not Even Once,” given its highly addictive nature and the dangers surrounding this very powerful drug.

“Meth is highly addictive and we need to address the devastating effects that meth can have on our youth and nation,” said Marcia Lee Taylor, President and CEO of the Partnership for Drug-Free Kids. “Meth Awareness Week offers a vital opportunity to educate families and members of the community about the risks of this potentially lethal drug and help encourage teens to make healthy decisions without the use of drugs or alcohol.”

The primary goal of Meth Awareness Week is to combat the use and abuse of methamphetamine, the week will kick off with a digital media campaign and social content that asks teens to get involved and take action.

News Releases Statement From Our President Teen Substance Use

Response from Creighton Drury, CEO of Center on Addiction, on Oklahoma Settlement Ruling

Please read the statement from Our CEO, Creighton Drury, in response to the opioids settlement ruling in Oklahoma