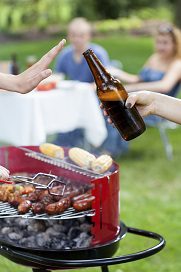 The rate of underage drinking dropped 6.1 percent from 2002 to 2013, according to a new government report. Binge drinking among U.S. residents ages 12 through 20 also declined, by 5.1 percent, USA Today reports.

In 2013, the study found 22.7 percent of young people said they had an alcoholic drink in the past month. In contrast, 16.9 percent of 12- to 20-year-olds used tobacco and 13.6 percent used illicit drugs, according to the report from the Substance Abuse and Mental Health Services Administration (SAMHSA).

The agency notes underage drinking increases the risk of developing an alcohol use disorder later in life and increases the likelihood of driving after drinking too much at some point in their lives.

“While we’re always very happy about these declines, we can’t lose sight of the fact that we have approximately 9 million underage drinkers in the country,” said Rich Lucey, special assistant to the director at SAMHSA’s Center for Substance Abuse. According to Lucey, the decline in underage drinking is due to an increased focus on the issue at the federal, state and local levels over the past decade.

The rate of binge drinking for those between ages 18 to 20 has remained between 39 percent and 44 percent for the past 20 years, Lucey said.