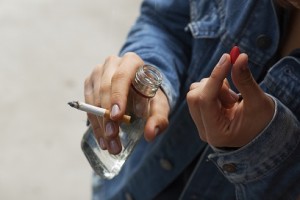 A new report finds the rate of prescription painkiller use among American teenagers is declining. The 2015 Monitoring the Future survey finds the rate of teen use of cigarettes, alcohol and synthetic marijuana is also decreasing, The New York Times reports.

The survey found 24 percent of all students said they smoked marijuana in the past year, about the same rate as a decade ago. However the rate of students who view daily marijuana use as harmful dropped from 58 percent in 2005 to 32 percent this year.

Many teens appear to be switching from regular cigarettes to e-cigarettes, the survey found.

The percentage of high school seniors who said they had used prescription opioids such as OxyContin or Vicodin dropped from 9.5 percent in 2004 to 5.4 percent this year. The percentage of students who said the pills were easy to obtain decreased. This suggests doctors are more cautious in their prescribing of painkillers and adults are keeping the drugs in more secure locations than the family medicine cabinet, according to the newspaper.

“We are heartened to see that most illicit drug use is not increasing, non-medical use of prescription opioids is decreasing, and there is improvement in alcohol and cigarette use rates,” Dr. Nora Volkow, Director of the National Institute on Drug Abuse Volkow, said in a news release. “However, continued areas of concern are the high rate of daily marijuana smoking seen among high school students, because of marijuana’s potential deleterious effects on the developing brains of teenagers, and the high rates of overall tobacco products and nicotine containing e-cigarettes usage.”

A survey finds 59% of Americans say they do not believe the tobacco industry is working to “be part of the solution to reduce the health effects of smoking,” STAT reports. The survey found 77% said they have an unfavorable view of the e-cigarette industry.

The Trump Administration is proposing shifting oversight of tobacco products from the Food and Drug Administration to a new agency that would be created under the Department of Health and Human Services, CNN reports.