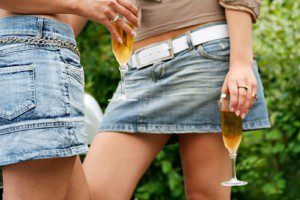 A new study finds teenage girls start drinking before their male peers, even though most strategies to reduce underage drinking are aimed at boys.

Researchers at Michigan State University analyzed data of about 390,000 teens and young adults, ages 12 to 24, who took part in government surveys on drug use and health. They found in the middle teenage years, girls are more likely than boys to start drinking. After age 19, males drink more than females, HealthDay reports.

“This new evidence from the United States shows that the so-called ‘gender gap’ in risk of becoming a drinker has narrowed to the point of there being no gap at all,” the researchers wrote in the journal Alcoholism: Clinical and Experimental Research.

“We really don’t know why girls are surpassing boys — that’s the next question we want to answer,” said lead researcher Dr. Hui Cheng. She noted that drinking has become more socially acceptable. Because girls usually reach puberty sooner than boys, some start engaging in risky behaviors earlier, she added. In addition, some younger girls may spend time with older boys, who expose them to drinking.

Girls may be attracted by ads for sweet, fruit-flavored drinks such as wine coolers, Cheng said.

A study published in December suggests women’s drinking habits are starting to catch up to men’s. The study from the National Institute on Alcohol Abuse and Alcoholism found that while men still drink more, a growing number of women are drinking, and drinking more frequently.