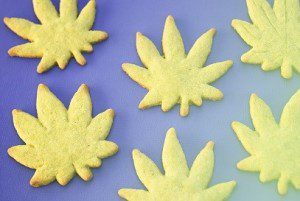 An increasing number of children under age 6 are being exposed to marijuana, according to a new study. Three-quarters of cases involve children who ingest the drug in the form of brownies, cookies and other foods containing marijuana.

Researchers at Nationwide Children’s Hospital in Columbus, Ohio investigated marijuana exposures among children under age 6 in the United States using data from the National Poison Data System. They report 18.5 percent of exposures required admission to a health care facility. More than 75 percent of cases involved children under the age of 3, Time reports.

Some children in the study experienced coma, decreased breathing or seizures. Levels of THC, the main psychoactive ingredient in marijuana, can be especially high in marijuana food products, the researchers noted.

Between 2006 and 2013, they found a 147.5 percent increase in marijuana exposure in children under age 6. The exposure rate jumped 610 percent in states where marijuana was legalized for medical purposes before 2000.

While the total number of reported exposure cases between 2000 and 2013 was not large—1,969 children—the quick rise in the rate of exposure is a cause for concern, the researchers wrote in the journal Clinical Pediatrics.

“Any state considering marijuana legalization needs to include child protection in its laws from the very beginning,” said senior author Gary Smith.

Co-author Henry Spiller said the high rates of marijuana ingestion are most likely due to the popularity of marijuana-laced treats. “Very young children explore their environments by putting items in their mouths, and foods such as brownies and cookies are attractive,” he noted in a news release.

The researchers recommend that packaging for commercially available marijuana products be child-resistant and not see-through. Marijuana products in households should be kept up, away and out of sight of children, preferably in a locked cabinet, they said.

The issue none seem concerned about is the enormous THC percentage “modern” marijuana contains. Since the lie of medicalization has deceived so many of the US population into supporting it there has been a steady rise in THC concentration. The average THC concentration coming out of “clinics” in Colorado is 19%. The THC smoked by hippies in the 60’s was 3-5%…I know, I was there. If you think we have a problem now, wait until BIG TOBACCO (who is biding their time) swoops in and seizes control. I find it amazing how in the 40’s and 50’s doctors were being used to advertise tobacco and they said it was actually “good for you”. I wonder what we will be saying about marijuana in 10 years…but by then it may be too late and an entire generation of young people will be stupid to care.

Mike’s comment about propaganda is irresponsible. This article shows that almost 3 children per week for the past 6 years have been exposed to marijuana. That alone
is of concern – but when you read the detail and see these are children under the age
of 6 years it is horrifying. The parents or caregivers of these children are to blame –
what’s the betting they are themselves users ? Not worried about the health of their young children – just using marijuana because they like to get stoned.

When the only hard number is buried that deep in the story you can be assured it’s total propaganda.