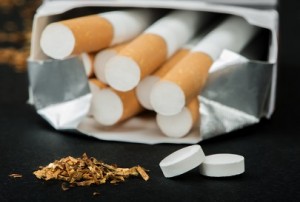 A new study finds smokers who start taking smoking-cessation medication before they are ready to quit have greater success once they do want to stop.

Doctors are currently advised to follow clinical practice guidelines that recommend patients set a quit date before they are prescribed smoking cessation pills such as Chantix, the medication used in the new study. Chantix is made by Pfizer, which funded the study, according to The New York Times.

The study included 1,500 smokers at 61 clinics in the United States and abroad. None of the smokers said they wanted to quit right away, but they all said they wanted to smoke less, and to quit within three months. Half of the smokers took Chantix twice a day, and the other half took placebo pills. Almost one-third of smokers who took Chantix quit within six months, compared with 6 percent of those taking the placebo.

The researchers estimated in the Journal of the American Medical Association that more gradual smoking cessation treatment could help as many as 14 million smokers in the United States.

“Sometimes serious addiction needs to be coaxed down the stairs one at a time, not thrown off the top floor,” said Dr. David Abrams, Executive Director of the Schroeder Institute for Tobacco Research and Policy Studies, who was not involved in the study.

Lead author Jon Ebbert, M.D. of the Mayo Clinic noted in a news release, “This study is important because this opens the door to treatment for approximately 14 million smokers who have no intention of quitting in the next 30 days but are willing to reduce their smoking rate while working toward a quit attempt. In the past, these smokers may have not received medication therapy, and we want them to know that different approaches are available.”