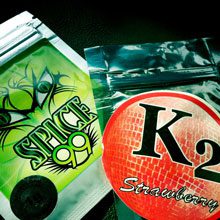 Hospitals across the country have been reporting hundreds of cases of seriously ill people coming to the emergency room after using synthetic marijuana. In New York City, more than 120 cases were reported in a single week, according to NPR.

Many cases have also been seen in Alabama and Mississippi. Several people have died, the article notes.

Synthetic marijuana is often sold under the name “K2” or “Spice.” According to the American Association of Poison Control Centers, these drugs can be extremely dangerous. Health effects can include severe agitation and anxiety; fast, racing heartbeat and high blood pressure; nausea and vomiting; muscle spasms, seizures, and tremors; intense hallucinations and psychotic episodes; and suicidal and other harmful thoughts and/or actions.

“We have to chemically restrain and physically restrain them because they become violent and very strong. It takes four to five personnel to restrain them on a gurney,” Dr. Robert Glatter, an emergency physician at Lenox Hill Hospital in New York City, told NPR. One patient last week ended up in the ICU. “He was combative and required sedation in the ER,” Dr. Glatter said.

There is likely something unusual about the K2 that is causing the recent rash of ER visits, Dr. Glatter notes. Makers of synthetic drugs frequently change their molecular structure, to evade laws that outlaw the drugs. The changing structure also makes the drugs more difficult to detect on drug tests. These changes make the effects of the drugs more unpredictable.

“Chemists are getting more and more creative in designing these structures,” said Marilyn Huestis of the National Institute on Drug Abuse. She added, “What’s in it today isn’t going to be what’s in it tomorrow.”

One of the unintended consequences of the War on Drugs is the creation of more dangerous drugs.

One of the reasons people seek out synthetic marijuana is that it does not produce a positive urine screening for THC.

Natural marijuana is not only far safer than these chemical concoctions, but it is therapeutic in many ways. Unfortunately, natural marijuana is still banned in most of the country and has severe criminal and civil penalties for its use.

The majority of the people purchasing these synthetic cannabinoids would much rather smoke pot. The real market for synthetics are folks who are drug tested. Those on probation or at a school that regularly drug tests, as it is difficult to detect in testing. I’ve’ had many folks who are addicted to pot report that they were smoking synthetic pot daily and hated it. Even though they would vomit and feel ill they felt they needed to get high. Point being, a big market for these drugs are the folks that have a problem. If they wanted regular old weed it would be readily available. Further, when the state sells pot the cartels and folks selling illicit pot will have a field day. They will provide cheaper, non-taxed and better pot than the state. They will compete with the state. The state will then need to spend a fortune on law enforcement to fight the “war on illicit pot sales” as now it hurts their business, so with money at stake they will fight with a new vengeance.

These designer substances have been spawned by the ill-advised war on drugs and will continue to proliferate as long as we maintain it. A system allowing adult purchase of familiar drugs in a controlled dispensary system to which minors would have no access, accompanied with counseling and other control measures against buying for resale would both destroy the illicit market where so much danger lurks, and begin the long road to national recovery from its drug war wounds. Read more about this idea at my blog site.