Harmful Drinking on the Rise Among Young People in Many Countries 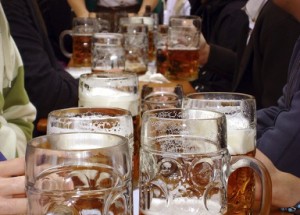 Harmful drinking is increasing among young people in many nations, according to a new report. Alcohol is becoming more available, affordable and more effectively advertised, the report concludes.

Overall, alcohol consumption in wealthy, developed nations has decreased in the past two decades, according to the report by the Organization for Economic Cooperation and Development (OECD). The group advises governments on economic growth.

Annual average alcohol consumption in its 34 member countries has decreased 2.5 percent over the past 20 years, to 9.1 liters (2.4 gallons) of pure alcohol per capita, the Associated Press reports. However, binge drinking by young people is a “major public health and social concern,” the OECD stated in the new report.

Rates of hazardous and heavy episodic drinking in young people, especially women, have jumped in many OECD countries, the report noted. The share of children under 15 who have been drunk rose from 30 percent to 43 percent for boys and from 26 percent to 41 percent among girls during the 2000s.

“The cost to society and the economy of excessive alcohol consumption around the world is massive, especially in OECD countries,” OECD Secretary-General Angel Gurría said in a news release. “This report provides clear evidence that even expensive alcohol abuse prevention policies are cost-effective in the long run and underlines the need for urgent action by governments.”