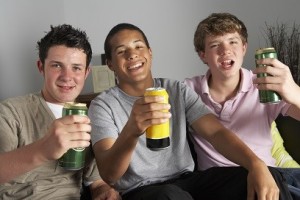 Brain scans may be able to detect changes in the brain in preteens that predict future alcohol abuse, a new study suggests.

The study included 135 preteen and teenage boys and girls who were an average of 12.6 years old, and who had not yet tried alcohol. They underwent MRI scans to evaluate their brain connections, Medical Daily reports. The scans focused on the brain’s executive control network (ECN), which includes the areas that process emotion, impulsivity and self-control.

Participants’ parents filled out a questionnaire about their children’s behavior, such as irritability, anger and sadness. The questionnaire is predictive of future alcohol misuse. The researchers compared the answers with the preteens’ MRI results.

“We know impaired functioning in the ECN is linked to an earlier age of drinking onset and higher frequency of drinking, but it was unclear whether this dysfunction occurred before drinking or was a consequence of alcohol use,” project researcher Tomas Clarke of Georgetown University Medical Center said in a news release. The researchers found children who were at high risk for alcohol abuse had significantly fewer connections in the ECN than those considered to be at low risk. “Our findings suggest reduced prefrontal cortex development predates alcohol use and may be related to future alcohol use disorders,” Clarke noted.

Project director Dr. John VanMeter added, “What this study is attempting to do is identify the differences in the brains of adolescents who go on to misuse alcohol and other drugs. If we know what is different, we may be able to develop strategies that can prevent the behavior.”

The research was presented this week at the Society for Neuroscience’s annual meeting.