E-Cigarettes May Increase Risk of Addiction to Cocaine and Other Drugs: Researchers 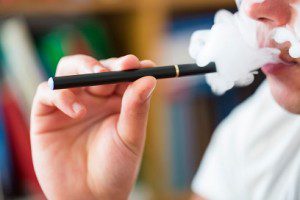 E-cigarettes may increase the risk of addiction to cocaine and other drugs, nicotine researchers suggest in this week’s New England Journal of Medicine.

While e-cigarettes eliminate some of the health risks associated with regular cigarettes, they are pure nicotine-delivery devices, with the same effects on the brain as cigarettes, according to the wife-husband research team Denise and Eric Kandel. They say e-cigarettes can serve as a “gateway drug,” making people more likely to use and become addicted to drugs, Time reports.

The Kandels note that epidemiologic studies have shown that nicotine use is a gateway to the use of marijuana and cocaine in human populations. In earlier research in mice, the Kandels found nicotine dramatically enhanced the effect of cocaine. Denise’s research suggests nicotine may have a similar effect in humans. She found most people who started using cocaine were also smoking. She also found the rate of cocaine dependence was highest among users who started using cocaine after having smoked cigarettes. Dependence was much lower among people who had begun using cocaine before they started smoking and among those who had never smoked more than 100 cigarettes.

While the typical e-cigarette user is described as a long-term smoker who is unable to stop smoking, e-cigarette use is increasing among teens and young adults, the Kandels note.

“Nicotine acts as a gateway drug on the brain, and this effect is likely to occur whether the exposure is from smoking tobacco, passive tobacco smoke or e-cigarettes,” they said. “More effective prevention programs need to be developed for all the products that contain nicotine, especially those targeting young people. Our data suggest that effective interventions would not only prevent smoking and its negative health consequences but also decrease the risk of progressing to illicit drug use and addiction.”

FDA to Ban Most E-Cigarette Flavors, but Makes Exception for Menthol

The Food and Drug Administration is expected to announce this week that it will ban most flavors of e-cigarette cartridges, but will exempt menthol and tobacco flavors.

Rate of Hospitalizations for Lung Injuries From Vaping On the Decline

The rate of hospitalizations for lung illnesses linked to e-cigarettes appears to be on the decline, according to the Centers for Disease Control and Prevention.

Those that do not think teens experiencing vaping can lead to further drug use are in denial. They can also put marijuana and synthetic drugs in these pipes.
Drugs continue to be a growing epidemic in America and sadly growing among teens. It’s time to wake up parents! Education, knowing what you’re kids are doing, where your kids are and who your kids are with are key. It’s not breaking their privacy, it’s called parenting. Keep them active and busy. But just because they’re friends with the Captain of the basketball team dkesvt keep then from it! I know personally 2 well-known kids that were captains of teams at different schools who were drug users. One used and the other one got sucked into dealing at the school.
Our kids are vulnerable.
Love, keeping them close and able to talk with you and education….we just cannot be naive on this matter. These kids are our future!

This is THE most ridiculous thing I have ever read!!! e-Cigarettes as a gateway to a cocaine proplem? With idiots came up with this. By the same principle we should not give children sweets or treats. Have you ever given a kid a sweet to a kid then the kid not asking for more??? Jesus he will grow up as a drug adictt.

I want to see a link to a study that shows, the control groups, age range. volunteer background and all the empirical data behind this study. Otherwise its just another load of bullshit.