Commentary: How Smoking Affects Our Pets and What We Can Do About It 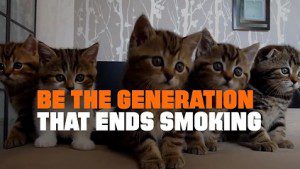 Smoking affects just about everything we care about in immediate and unexpected ways. The effects can be felt regardless of whether you personally smoke, and it turns out that can serve as a powerful inspiration to help end tobacco use.

In 2015, truth® introduced the surprising impact that tobacco has on dating and relationships with “Left Swipe ‘Dat.’” The ad was a music video and used humor to drive home a serious message – that smoking is not only deadly, it is unattractive – as a way to engage teens.

This year we added another surprise: It’s not just our human relationships that are at risk. Smoking also affects our pets.

According to the 2015-2016 American Pet Products Association survey of pet owners, 65 percent of all households in the United States own pets. That’s 79.7 million households. Yet, researchers have also estimated that one out of every five pet owners smokes.

Here’s the kicker: Dogs and cats are twice as likely to get cancer if their owners smoke.

But there is something we can do about that.

According to a recent truth survey, 75 percent of young pet owners said that the harm to pets is a reason not to smoke. They’re not alone. In a 2009 study published in the journal Tobacco Control, researchers found that pet owners who smoke said that information on the danger of pet exposure to secondhand smoke would motivate them to quit.

The truth campaign is tapping into that love of pets, using humor to drive home a serious message about second-hand smoke as part of its continuing “Finish It” effort to inspire a movement among youth and young adults to be the generation that ends tobacco use. The  #CATmageddon video, which premiered during the 58th Annual Grammy Awards, introduces us to some scary math: Smoking = No Cats = No Cat Videos. In a second video, #FinishIt urges pet owners to treat our best friends like real best friends. Both are part of an extensive digital, social media and TV effort to reach millions of young people and engage them to enlist and harness their own social networks to be part of a powerful movement to end the tobacco epidemic. To ate, #CATmageddon and #FinishIt have been viewed more than 55 million times.

truth also partnered with Petco, a leading pet specialty retailer, to help spread the word. Beginning March 1, all Petco locations nationwide began giving out free Finish It pet collar charms and tips on how to protect pets from the negative impact of tobacco.

The truth survey made it clear that pet owners take the health of their pets seriously. Nearly 25 percent of young pet owners said they have taken a sick day in order to take care of a pet. Respondents also said they were more likely to buy organic food for their pets than for themselves.

So the more attention we bring to the impact that smoking has on pets, and the more young people we can inspire to help us finish the tobacco epidemic, the more lives – humans and pets – we can save.

I think this a very good piece of information that you have provided here. A bundle of thanks.