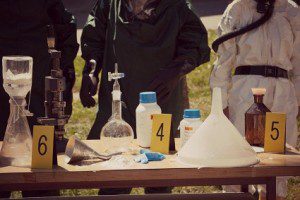 With the opioid epidemic on the front page of many media reports, the public may think that the use of methamphetamine (meth) has dissipated. However, while taking a backseat to the prescription drug and heroin crisis, the abuse of meth continues to plague our nation. In an attempt to combat this issue, many states have strengthened their laws regarding the retail sales of the meth precursors, ephedrine (E) and pseudoephedrine (PSE), often contained in cold medicines.

As of December 2015, 44 states have, in some way, restricted the sales of products containing E and PSE. Two of these states (Mississippi and Oregon) require a prescription for such products, while one (Arkansas) requires a prescription if a purchaser does not live in the state or is not on active duty with the U.S. military. Twenty-nine states have instituted some form of electronic tracking (state or federal) of over-the-counter sales of medications containing the meth precursors, and 17 of the electronic tracking systems generate “stop-sale alerts” which notify retailers that a person attempting to purchase a product containing E or PSE is prohibited from doing so. Of those 17 systems, 15 states allow an override after a stop-sale alert if the sales clerk has a reasonable fear of imminent bodily harm if he or she does not process the sale. A handful of states do not require electronic tracking of the substances, but do require some form of written records of their sale. Four states restrict anyone with a prior drug-related conviction from purchasing E or PSE, with Alabama having the most comprehensive restrictions for someone convicted of a drug offense. Moreover, 19 states have placed E and/or PSE on their lists of scheduled controlled substances, with a slight majority placing them into Schedule V.

Although the state daily and monthly sales limits of E and PSE vary (e.g., from a daily limit of two packages to nine grams or a monthly limit of five grams to nine grams), a majority of the laws prohibit anyone from purchasing a daily limit of 3.6 grams or a 30-day limit of nine grams. A majority of the states require a purchaser to present some form of identification before buying a product containing E or PSE, and all but two states require a purchaser to be at least 18 years of age. Most states dictate where the products be kept prior to sale (e.g., behind the pharmacy counter or in a locked case).

During the 2015 legislative session, four states (Maine, Montana, North Carolina, and Tennessee) strengthened their laws governing access to meth precursors. Moreover, in January 2016, state legislators in two states (Indiana and West Virginia) introduced legislation that would require a prescription to purchase a PSE product. The Indiana bill makes all compounds or mixtures that contain E or PSE Schedule III controlled substances that can be dispensed only by prescription, except in rare exceptions. The bill in West Virginia makes such products a Schedule IV controlled substance, except for products which are primarily intended for administration to children under the age 12.

According to ABC News, meth seizures at our borders with Mexico have sky-rocketed.[1] This may indicate that although tough legislative and regulatory restrictions in this country have drastically reduced the number of domestic meth labs, there is some question as to whether they are effective in reducing the demand for meth. Time will tell if restricting access to methamphetamine precursors, including limiting sales to only those individuals with a doctor’s prescription, will ultimately result in decreased methamphetamine use in the U.S.

In the SW US the majority is not home made but very pure product from Mexico. Out drug task force in Eddy County NM has made numerous seizure of Mexican Meth that is 90%+ pure in 25 pound unites. This will have little impact on out problem but may help others.