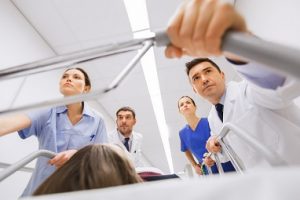 A new program in Pennsylvania called “warm handoff” directly transfers overdose survivors from the hospital emergency department to a drug treatment provider. The program, developed by the state’s Department of Drug and Alcohol Programs (DDAP), is designed to avoid merely giving survivors a phone number to call or setting up a subsequent appointment a day or two later.

“There is a very high risk of a repeat overdose in the period right after a person leaves the emergency room for a drug overdose,” says Gary Tennis, Secretary of the Pennsylvania DDAP.  “Our aim is to avoid that risk by getting the survivor directly to treatment without hitting the street at all.”

The program approaches overdose survivors in much the same way as the survivor of a massive heart attack, Tennis explains. “You wouldn’t just hand someone who had a massive heart attack a cardiologist’s card and say, ‘Here, go set up an appointment with this person.’ The hospital immediately starts the patient on the next level of care to get them better, or else they could die. The same should be true of overdose survivors.”

The idea for the program came about as police across Pennsylvania have reversed more than 1,600 opioid overdoses since November 2014 with the opioid overdose antidote naloxone. “Many people who would have died are now being saved in the ER, but the protocol there has been to release people once they are stabilized, or at most given a card with a referral for treatment,” says Tennis, who is also Chairman of the National Alliance for Model State Drug Laws.

His staff reviewed other programs around the country that bring people directly from the ER into treatment, and put together a list of five options for county drug and alcohol directors. DDAP has mandated that county drug and alcohol authorities develop, implement and maintain a plan for screening, assessment, treatment and tracking of overdoses survivors.

“We told them they have to reach out to every hospital ER in their county and set up some type of protocol for warm handoff,” Tennis says. “Who is involved can vary. It can be a certified recovery specialist from a treatment center, a hospital social worker or a government employee. In some cases, the warm handoff is handled by a person in recovery themselves, who can relate to what the patient is going through.”

Warm handoff case management teams immediately meet with survivors and their family in the emergency department. The team works to convince the survivor of the need for treatment, provide a clinical assessment and immediately facilitate transfer to a treatment program. Tennis notes that as with any hospital patient, overdose survivors have the legal right to refuse referral to treatment.

A key goal of the program is to ensure that healthcare professionals dealing with overdose survivors understand the intense shame and stigma that can accompany drug addiction. “We talk to them about treating these individuals with respect and caring, as people of value,” Tennis says.

While the warm handoff program is not yet up and running in every county in the state, some counties are already reporting success, Tennis says. In Berks County, Reading Hospital has been able to get between two-thirds to three-quarters of overdose survivors directly into treatment. Of the remaining patients, many have gone into treatment in the week or two after they have been discharged from the hospital.

In an area west of Pittsburgh, the Armstrong-Indiana-Clarion Drug and Alcohol Commission reports almost half of individuals referred to their warm handoff team have accessed treatment.

Funding for the Pennsylvania program comes from block grant funding. “Our block grant provides only a fraction of what is needed to treat everyone with this disease,” Tennis acknowledges. “We also don’t have enough detox beds and treatment beds,” he adds. “Our governor has moved us forward with Medicaid expansion, which has increased funding for addiction treatment. But right now we are in an all-out campaign to increase the treatment infrastructure in Pennsylvania. We must understand that if a drug overdose survivor is released onto the street, their lives are in great jeopardy.”